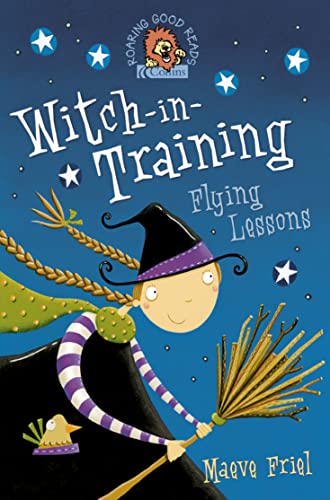 The first title in a new series of magical books for younger readers, by Irish author Maeve Friel. On Jessica's tenth birthday she discovers she is a young witch...Launch title of Roaring Good Reads series.

The first title in a new series of magical books for younger readers, by Irish author Maeve Friel. On Jessica's tenth birthday she discovers she is a young witch...Launch title of Roaring Good Reads series.

The first in a new series of magical books for younger readers, by Irish author, Maeve Friel. Jessica thinks she is an ordinary ten-year-old girl but by the end of this first book, she is on the way to becoming a very bright young witch! When she sees the broomstick for sale outside Miss Strega's hardware shop, Jessica is intrigued. for on the price label it also says: Flying Lessons Extra. Jessica can't resist peeking inside the shop and ends up beginning her first lesson in witchcraft. Jessica learns that there is more to learn about flying a broomstick than meets the eye. First, you have to use the branches as gears - so the twigs must be in front of you, not behind you as every other witchy book show. The foremost twigs are for twirling, zooming, spinning, ducking, diving, moon-vaulting, and star falling. The Eject twig, is for getting rid of unwanted hangers on, Goblins, dragons - any sort of pest that tries to hitch a ride. Join Jess as she works towards her Flying Certificate and becomes a GASP of BR[EATH] in order words, a Graduate Airborne Spinner of Broom Riders [Earth and the Heavens]!

Launch title in the Roaring Good Reads younger fiction promotion from Collins to be launched this month.

Maeve Friel is a published author in Ireland of 3 titles for older readers, published by Poolbeg. She has been shortlisted for the Bisto Awards twice and has won an RAI Award [equivalent of English UKRA] In 1990 she won the Hennessy Cognac/Sunday Tribune Literary Award for an emerging writer. Reviewers in Ireland have liken her style to that of Anne Fine's. Maeve was brought up in Northern Ireland and went to university in Dublin. She and her husband now divide their time between West Donegal, Ireland and a tiny village in Andalucia, Spain. They have two grown-up daughters, both working in the field of the creative arts.

GOR001676530
Flying Lessons (Witch-in-Training, Book 1) by Maeve Friel
Maeve Friel
Witch-in-Training
Used - Very Good
Paperback
HarperCollins Publishers
2002-07-01
96
0007133413
9780007133413
N/A
Book picture is for illustrative purposes only, actual binding, cover or edition may vary.
This is a used book - there is no escaping the fact it has been read by someone else and it will show signs of wear and previous use. Overall we expect it to be in very good condition, but if you are not entirely satisfied please get in touch with us.