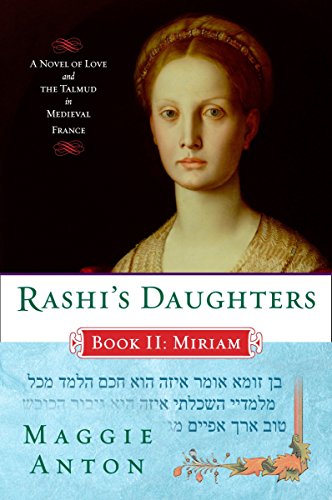 Out of Stock
$18.49
inc. GST
The engrossing historical series of three sisters living in 11th-century France continues with the tale of Miriam, the lively and daring middle child of a great Talmudic authority. Anton brings both time and place to vivid life, and captures the struggles and triumphs of strong Jewish women.
Well Read
Only 0 left

Rashi's Daughters, Book II: Miriam: A Novel of Love and the Talmud in Medieval France by Maggie Anton

The engrossing historical series of three sisters living in eleventh-century Troyes, France, continues with the tale of Miriam, the lively and daring middle child of Salomon ben Isaac, the great Talmudic authority. Having no sons, he teaches his daughters the intricacies of Mishnah and Gemara in an era when educating women in Jewish scholarship was unheard of. His middle daughter, Miriam, is determined to bring new life safely into the Troyes Jewish community and becomes a midwife. As devoted as she is to her chosen path, she cannot foresee the ways in which she will be tested and how heavily she will need to rely on her faith. With Rashi's Daughters, author Maggie Anton brings the Talmud and eleventh-century France to vivid life and poignantly captures the struggles and triumphs of strong Jewish women.

"Anton delivers a tour de force . . . [Readers] will fly through the pages and come away wishing for more."--Library Journal (starred review)

"A compelling combination of drama, suspense, and romance."--Lilith magazine

Maggie Anton was born Margaret Antonofsky in Los Angeles, California. Raised in a secular, socialist household, she reached adulthood with little knowledge of her Jewish religion. All that changed when David Parkhurst, who was to become her husband, entered her life, and they both discovered Judaism as adults. In the early 1990's, Anton began studying Talmud in a class for women taught by Rachel Adler, now a professor at Hebrew Union College in Los Angeles. She became intrigued with the idea that Rashi, one of the greatest Jewish scholars ever, had no sons, only three daughters. Slowly but surely, she began to research the family and the time in which they lived. Legend has it that Rashi's daughters were learned in a time when women were traditionally forbidden to study the sacred texts. These forgotten women seemed ripe for rediscovery, and the idea of a book about them was born.

GOR004284345
Rashi's Daughters, Book II: Miriam: A Novel of Love and the Talmud in Medieval France by Maggie Anton
Maggie Anton
Rashi's Daughters
Used - Well Read
Paperback
Unknown
0
0452288630
9780452288638
N/A
Book picture is for illustrative purposes only, actual binding, cover or edition may vary.
This is a used book - there is no escaping the fact it has been read by someone else and it will show signs of wear and previous use. Overall we expect it to be in very good condition, but if you are not entirely satisfied please get in touch with us.