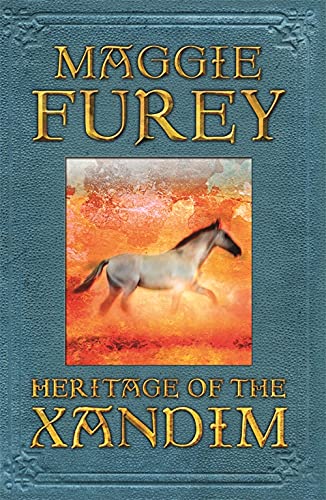 Heritage Of The Xandim
by Maggie Furey

Out of Stock
$15.49
inc. GST
Bestselling author and original WHS FRESH TALENT choice is back with a new novel in MMP format
Good
Only 0 left

Heritage Of The Xandim Summary

Heritage Of The Xandim by Maggie Furey

The Lady of the Mists has seen a vision:

'Three women, all born when the moon was concealed by the shadow of the sun, would hold the future of the world in their hands, determining whether it would be lost or saved. Three children of a red moon, a blood moon ... One a wizard, one Phaerie Born, and the other ...'

Try as she would to see this woman - and she knew in her heart it was a woman - all that would come into her mind was the image of a grey horse, running, running ...

Following the passing of Valir, Croisand has become the Windeye, the Shaman of the Xandim. Once shapeshifters, the Xandim were able to pass from human to equine form, until they were cursed by Hellorin, the Forest Lord of Phaerie, locked into horse form and mind, to act as steeds for his people, coursing across the night skies as they hunt down humans.

But now Corisand has been gifted with Valir's unique knowledge, she alone knows that her race could be so much more. And she alone holds the key to stopping an act of epic folly from overturning the worlds of Phaerie, Magefolk and mortal alike.

Maggie Furey was one of the original WHS FRESH TALENT authors and has gone on to be very successful in the UK and USA. She is also widely translated. She underwent extensive heart surgery two years and has since made a full recovery. Brought up in County Durham, she now lives in Ireland near Limerick.