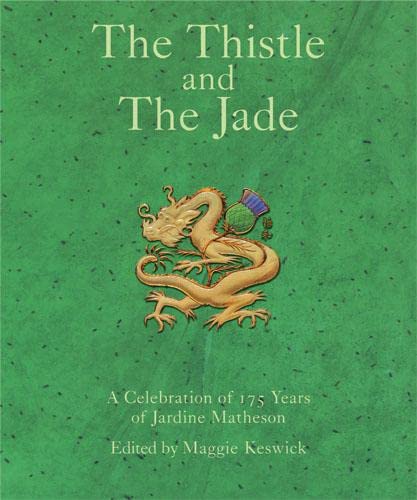 The Thistle and The Jade
by Maggie Keswick

Used Price
$210.99
inc. GST
Free Shipping in Australia
A fascinating miscellany of scholarship and anecdote that tells the story of Jardine, Matheson & Co., founded in Canton in 1832, which grew to become an international trading house with business interests throughout the world.
Reviews:
Trustpilot
Very Good

The Thistle and The Jade Summary

The Thistle and The Jade: A Celebration of 175 Years of Jardine, Matheson & Co. by Maggie Keswick

Jardine, Matheson & Co. was founded in Canton in 1832, and built up to become an international trading house with business interests throughout the world. The Thistle & The Jade assembles contributions from both leading historians, such as Professor John King Fairbank and Professor K.C. Lui, and old Jardine hands, including Alan Reid and Sir John Keswick, to tell the story of how this happened. The result is a fascinating miscellany of scholarship and anecdote that tells an exciting tale of merchant adventure, of how wealth and influence were accumulated in the early days of trading, and of the special relationship forged by 'the Princely Hong' with China and her people.

Customer Reviews - The Thistle and The Jade

Clara Weatherall grew up in London. She went to live in the Philippines in 1987 when her husband, Percy, was running the Jardine Office in Manila. In 1991 they moved to Hong Kong. She was chairman of the Keswick Foundation (started by Maggie and her father, Sir John Keswick), for ten years. She and Percy, whose great-great-grandfather was William Keswick, returned to live in Dumfriesshire, Scotland, in 2006.

Maggie Keswick first went to China when she was 4 years old. She was educated in Shanghai and Hong Kong and, in Britain, at Oxford University and the Architectural Association, London. She was married to the architecture critic and historian Charles Jencks, with whom she made the famous conceptual garden at Portrack, near Dumfries.

GOR003409015
The Thistle and The Jade: A Celebration of 175 Years of Jardine, Matheson & Co. by Maggie Keswick
Maggie Keswick
Used - Very Good
Hardback
Frances Lincoln Publishers Ltd
2008-04-10
320
0711228302
9780711228306
N/A
Book picture is for illustrative purposes only, actual binding, cover or edition may vary.
This is a used book - there is no escaping the fact it has been read by someone else and it will show signs of wear and previous use. Overall we expect it to be in very good condition, but if you are not entirely satisfied please get in touch with us.