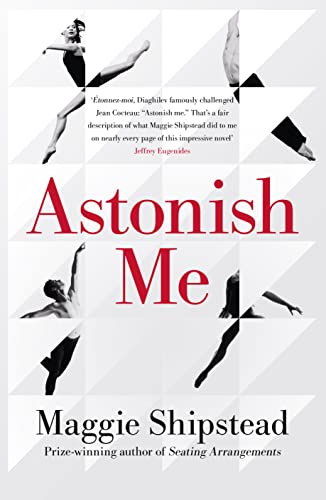 Astonish Me
by Maggie Shipstead

From the prize-winning author of Seating Arrangements comes an exquisitely written, fiercely compelling glimpse into the demanding world of professional ballet and its magnetic hold over two generations.

Astonish Me by Maggie Shipstead

From the prize-winning author of Seating Arrangements comes an exquisitely written, fiercely compelling glimpse into the demanding world of professional ballet and its magnetic hold over two generations.

Astonish Me is the irresistible story of Joan, a young American dancer who helps a Soviet ballet star, the great Arslan Rusakov, defect in 1975. A flash of fame and a passionate love affair follow, but Joan knows that, onstage and off, she is destined to remain in the shadows.

After her relationship with Arslan sours, Joan decides to make a new life for herself. She quits ballet, marries a good man, and settles into the rhythm of Californian life with their son, Harry. But as the years pass, Joan comes to understand that ballet isn't finished with her yet: for there is no mistaking that Harry is a prodigy. Inevitably Joan is soon pulled back into a world she thought she'd left behind and back to Arslan.

Gripping and dramatic, Astonish Me is a story about the nature of talent, the choices we must make in search of fulfilment, and how we can never truly escape from the secrets of the past.

'Brims with emotion ... an accomplished novel embracing both domestic drama and the competitive quest for perfection' Sunday Times

'So graceful, so dazzling, so sure-handed and fearless, that at times I had to remind myself to breathe' Maria Semple, author of Where'd You Go, Bernadette

'A bravura display of high-performance art, the only constant its quest for perfection' Catherine Taylor, Guardian

'Very well-written, and cleverly constructed with some elegant pirouettes of its own in the story's twists and turns' Daily Mail

'Passionate, gripping and wise about the human heart. One of those wonderful books that leave you bereft yet completely satisfied' Lucie Whitehouse, author of Before We Met

'Shipstead is shaping up as a master storyteller' Financial Times

'Brilliantly written; the first ballet novel for grown-ups' The Times

Maggie Shipstead graduated from Harvard in 2005 and earned an M.F.A at the Iowa Writers' Workshop. She was also a Stegner Fellow at Stanford University. Her debut novel, Seating Arrangements, won the Dylan Thomas Prize and the LA Times Prize for First Fiction. Astonish Me is her second novel.

GOR006760978
Astonish Me by Maggie Shipstead
Maggie Shipstead
Used - Very Good
Paperback
HarperCollins Publishers
2014-03-24
368
0007525370
9780007525379
N/A
Book picture is for illustrative purposes only, actual binding, cover or edition may vary.
This is a used book - there is no escaping the fact it has been read by someone else and it will show signs of wear and previous use. Overall we expect it to be in very good condition, but if you are not entirely satisfied please get in touch with us.