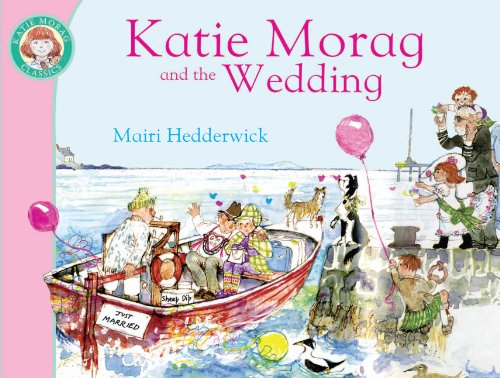 Katie Morag and the Wedding
by Mairi Hedderwick

Used Price
$33.99
inc. GST
Free Shipping in Australia
Welcome to the Island of Struay, home of one of the best-loved characters in children's books and as seen on TV - Katie Morag McColl! Everyone, that is, except Grannie Island.But Granma Mainland has a surprise in store for Grannie Island, one that makes her very happy indeed!
Reviews:
Trustpilot
Very Good

Katie Morag and the Wedding Summary

Katie Morag and the Wedding by Mairi Hedderwick

Welcome to the Island of Struay, home of one of the best-loved characters in children's books and as seen on TV - Katie Morag McColl! Romance has been brewing on the island between Neilly Beag and Granma Mainland and everyone is thrilled when they announce that they are to be married. Everyone, that is, except Grannie Island. For some reason that Katie Morag can't fathom her granny is NOT happy at all. But Granma Mainland has a surprise in store for Grannie Island, one that makes her very happy indeed!

Katie Morag and the Wedding Reviews

A graduate of Edinburgh College of Art, Mairi Hedderwick was a teacher before she started illustrating children's books. As an author and illustrator her most popular character, Katie Morag, was created in 1984. Katie Morag's home on the fictional Hebridean island of Struay is not a million sea miles away from her author's life long association with the Isle of Coll. In 2013 Katie Morag joined Cbeebies with the successful TV series produced by Move On Up / Struay Films. Mairi Hedderwick has also written and illustrated many other books for children and adults, all with the backdrop of the Highlands and Islands. She was awarded an Honorary Degree from Stirling University in 2003 in recognition of her outstanding contribution to writing and illustration in Scotland, especially for children. Her illustrated adult books are An Eye on the Hebrides, which is a record of a six month continous journey through the islands on the west of Scotland. Highland Journey, follows the footsteps of Victorian writer and artist John T Reid; Sea Change, logs the passage of 26ft vintage yacht Anassa from east to west coast Scotland via the Caledonian canal; Shetland Rambles, her latest illustrated personal journey is in tandem with John T Reid once more. The Last Laird of Coll is a memoir of Kenneth Stewart, last laird of Coll.

GOR003414222
Katie Morag and the Wedding by Mairi Hedderwick
Mairi Hedderwick
Katie Morag
Used - Very Good
Paperback
Random House Children's Publishers UK
2010-04-01
32
1849410933
9781849410939
N/A
Book picture is for illustrative purposes only, actual binding, cover or edition may vary.
This is a used book - there is no escaping the fact it has been read by someone else and it will show signs of wear and previous use. Overall we expect it to be in very good condition, but if you are not entirely satisfied please get in touch with us.