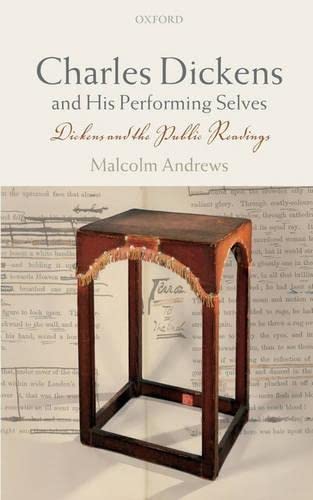 Charles Dickens and His Performing Selves
by Malcolm Andrews

In Stock
$43.99
inc. GST
Charles Dickens's public readings have not had the attention they deserve, and yet Dickens put as much effort into perfecting his performances as he did with his novels. These performances were sensational events and won Dickens thousands of new admirers. This book talks about these performances.
Very Good
Only 1 left

Charles Dickens and His Performing Selves: Dickens and the Public Readings by Malcolm Andrews

Charles Dickens had three professional careers: novelist, journalist and public Reader. That third career has seldom been given the serious attention it deserved. For the last 12 years of his life he toured Britain and America giving 2-hour readings from his work to audiences of over two thousand. These readings were highly dramatic performances in which Dickens's great gift for mimicry enabled him to represent the looks and voices of his characters, to the point where audiences forgot they were watching Charles Dickens. His novels came alive on the platform: at the end of a reading, it seemed to many that a whole society had broken up rather than that a solitary recitalist had concluded. This book tries to recreate, in greater detail than hitherto, the sense of how those readings were performed and how they were received, how Dickens devised his stage set and tailored his books to make them into performance scripts, how he conducted his reading tours all around the country and developed a quite extraordinary rapport with his listeners. No single study of this late career of Dickens has drawn to such an extent on contemporary witnesses to the readings as well as tried to assess in some depth the significance of what Dickens called 'this new expression of the meaning of my books'. 'I shall tear myself to pieces', he said as he waited eagerly to go on stage for his performance, and that is ironically what he did, in ways he perhaps had not quite intended: he fractured into dozens of different characters up there on the platform, and as he thus tore himself to pieces his health collapsed irretrievably under the pressures he put upon himself to achieve these masterly illusions.

In achieving all its ambitions, Andrews's book does then add yet another chapter to the extraordinary volume of Dickens's life and work. Grahame Smith, The Review of English Studies ...makes a superb and indeed original contribution to our understanding of Dickens the novelist David Paroissien, Dickens Quarterly [a] richly detailed and thought-provoking study John Bowen, TLS [a] subtle and probing study...Andrews writes with deep imaginative sympathy of the phenomenon that was Dickens Simon Callow, The Guardian This intriguing study...gives us a superb account which does much to help our understanding of the phenomenon that was Charles Dickens. Contemporary Review

Malcolm Andrews is Professor of Victorian and Visual Arts at the University of Kent. He is the author of Dickens and the Grown-up Child and the Editor of The Dickensian, the journal of the international Dickens Fellowship. He has also written on landscape and art history in two books, The Search for the Picturesque: Toursim and Landscape Aesthetics in Britain, 1760-1800 and Landscape and Western Art (in the Oxford History of Art series). He has performed Readings from Dickens over a number of years.

Premiere: New York, December 1867; 1. A Community of Readers; 2. Reading, Reciting, Acting; 3. Impersonation; 4. Celebrity on Tour; 5. Performance; 'Sikes and Nancy': A Re-enactment; 6. A 'New Expression of the Meaning of my Books'; Finale: London, March 1870; Appendix: Schedule of the Reading Tours

GOR006102888
Charles Dickens and His Performing Selves: Dickens and the Public Readings by Malcolm Andrews
Malcolm Andrews
Used - Very Good
Hardback
Oxford University Press
2006-10-26
346
0199270694
9780199270699
N/A
Book picture is for illustrative purposes only, actual binding, cover or edition may vary.
This is a used book - there is no escaping the fact it has been read by someone else and it will show signs of wear and previous use. Overall we expect it to be in very good condition, but if you are not entirely satisfied please get in touch with us.