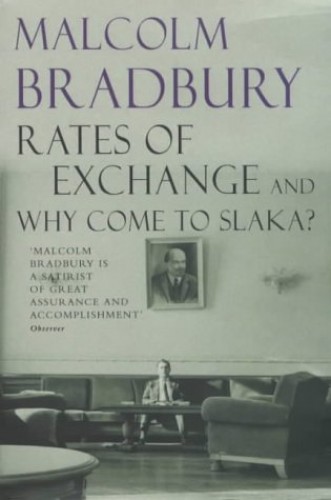 Rates of Exchange
by Malcolm Bradbury

In Stock
$11.49
+10% GST
A wickedly funny satire - 'the work of a master, and a master not only of language and comedy, but of feeling too' Sunday Times
Very Good
Only 2 left

Rates of Exchange by Malcolm Bradbury

Welcome to Slaka! A land of lake and forest, of beetroot and tractor, of cultural riches and bloody battlefields.

Malcolm Bradbury's hilariously entertaining and witty novel, RATES OF EXCHANGE, introduces the small, eastern European country of Slaka. In less than two short weeks there, first-time visitor Dr Petworth manages to give a rather controversial lecture, get embroiled in the thorny thickets of sexual and domestic intrigues, fall in love, and still find time to see the main tourist attractions.

In the wickedly funny satire WHY COME TO SLAKA? Malcolm Bradbury offers the would-be visitor, la Dr Petworth, a wealth of information about the Slakan state, its pageantry and politics, its people and public figures, as well as some essential Slakan phrases: 'American Express? That will do very nicely.'

GOR001994098
Rates of Exchange by Malcolm Bradbury
Malcolm Bradbury
Used - Very Good
Paperback
Pan Macmillan
2003-05-16
464
0330412892
9780330412896
N/A
Book picture is for illustrative purposes only, actual binding, cover or edition may vary.
This is a used book - there is no escaping the fact it has been read by someone else and it will show signs of wear and previous use. Overall we expect it to be in very good condition, but if you are not entirely satisfied please get in touch with us.