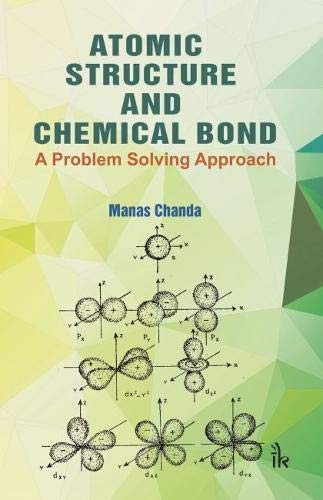 Covering most of the topics taught in university courses in quantum chemistry, this authoritative text provides modern concepts of atomic and molecular structure as well as chemical bond.

Covering most of the topics taught in university courses in quantum chemistry, this authoritative text provides modern concepts of atomic and molecular structure as well as chemical bond.

Brief historical account of the origin of quantum theory, its applications to the problem of atomic spectra and atomic structure have been discussed. Electronic configuration of atoms based on the four-quantum-number system, symbols for atomic states, and classification of elements and their distribution in the periodic table have been given a comprehensive treatment.

The valence bond and molecular orbital methods of bonding, hybridization, orbital structure of common hydrocarbons, bonding in coordination compounds based on valence bond and ligand field theories, the concept of valency, ionic and covalent bonding, bonding in metals, secondary bond forces, and so on have been discussed in a reasonable amount of detail.

A unique feature of the book is the adoption of a problem solving approach. Thus, while the text has been frequently interspersed with numerous fully worked out illustrative examples to help the concepts and theories, a large number of fully solved problems have been appended at the end of each chapter (totalling nearly 300).

With its lucid style and in-depth coverage, the book would be immensely useful to undergraduate and postgraduate students of general chemistry and quantum chemistry. Students of physics and materials science would also find the book an invaluable supplement.
Manas Chanda was professor and UGC Emeritus Scientist at the Indian Institute of Science, Bangalore. He also worked as a summer term visiting professor at the University of Waterloo, Waterloo, Ontario, Canada, from 1978 to 2000. He guided the PhD research of 15 students and about 20 Masters dissertations. A fivetime recipient of the International Scientific Exchange Award from the Natural Sciences and Engineering Research Council of Canada, Dr. Chanda is author and coauthor of more than 100 scientific papers, articles, and books on different aspects of science of materials.
NGR9789386768360
9789386768360
9386768364
Atomic Structure and Chemical Bond: A Problem Solving Approach by Manas Chanda
Manas Chanda
New
Paperback
I K International Publishing House Pvt. Ltd
2019-08-30
400
N/A
Book picture is for illustrative purposes only, actual binding, cover or edition may vary.
This is a new book - be the first to read this copy. With untouched pages and a perfect binding, your brand new copy is ready to be opened for the first time
Trustpilot