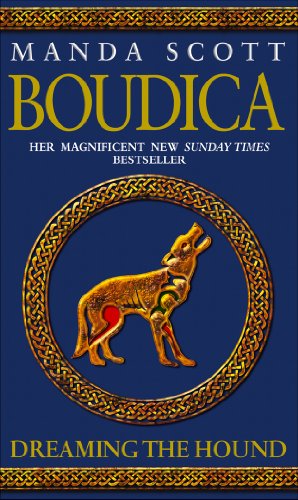 Used Price
$15.49
inc. GST
Free Shipping in Australia
Set in AD 57, when much of Britannia was under Roman occupation, this is the story of the Boudica or Bringer of Victory as Breaca has long been hailed. She knows for certain that her lover, Caradoc - betrayed, captured and kept hostage in Rome - will never return to her. She decides take her warriors to wage a guerilla war in Eceni heartland.
Reviews:
Trustpilot
Very Good Good Well Read

Boudica: Dreaming The Hound: A Novel of Roman Britain: Boudica 3 by Manda Scott

AD 57: much of Britannia has been under Roman occupation for over ten years, with key areas in the south and east administered as vassal states, where the tribes pay costly tithes to the Emperor in return for the right to continue living on their own lands.

On the sacred isle of Mona, the Boudica or Bringer of Victory as Breaca has long been hailed, now knows for certain that her lover, Caradoc - betrayed, captured and kept hostage in Rome - will never return to her. She decides to leave Mona where she and her warriors have been waging a guerilla war, and to take the fight to the Eceni heartland where it is needed most. With her are her children, Cunomar and Grainne, and her best friend from childhood, ex-lover and dreamer, Airmid. But the once proud Eceni are a downtrodden and defeated people who are forbidden on pain of death to worship their old gods, and now scrape a living from the once fertile land.

Across the sea in Hibernia, Breaca's half-brother Ban, is struggling to make peace with his fractured past. Soon, provoked by Roman aggression, he will sail to Britain to protect Mona, and from there he will go to Camulodinum, and, united with his sister, he and Breaca will face down the might of Rome in the bloodiest revolt the western world has ever known.

Breathtaking work that's likely to be remembered for years to come * Focus *
This mesmerising story creates a living past of battle feats, betrayals, heartbreaking loyalties and cruelties * Norfolk Journal *
A meticulously detailed book with a fascinating plot * The Good Book Guide *
Full of imaginative invention, adventure and compelling descriptive prose, reminiscent of Dorothy Dunnett's writing. The best book I have read in a long time * Woman's Weekly *
Manda Scott writes with rich imagination and brilliantly reconstructs history before your eyes * Cambridge Journal *

Manda Scott is a veterinary surgeon, writer and climber. Born and educated in Scotland, she now lives in Suffolk with two horses, two lurchers and too many cats.

Manda Scott first made her name as a crime writer. Her debut novel, Hen's Teeth, was shortlisted for the Orange Prize. Her subsequent novels are Night Mares, Stronger than Death and No Good Deed, for which she was hailed as 'one of Britain's most important crime writers'.

Dreaming the Eagle and Dreaming the Bull, the first and second books in the Boudica series, are also published by Bantam Books and the fourth book, Dreaming the Serpent Spear, by Bantam Press.

For more information on Manda Scott and her books, visit her website at wwww.mandascott.co.uk

GOR001238285
Boudica: Dreaming The Hound: A Novel of Roman Britain: Boudica 3 by Manda Scott
Manda Scott
Boudica
Used - Very Good
Paperback
Transworld Publishers Ltd
2006-02-01
720
0553816365
9780553816365
N/A
Book picture is for illustrative purposes only, actual binding, cover or edition may vary.
This is a used book - there is no escaping the fact it has been read by someone else and it will show signs of wear and previous use. Overall we expect it to be in very good condition, but if you are not entirely satisfied please get in touch with us.