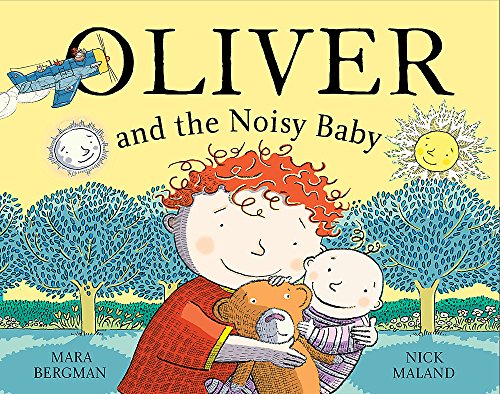 Oliver and the Noisy Baby
by Mara Bergman

Out of Stock
$40.99
inc. GST
A fantastic new story about Oliver, the brave and fearless traveller!
Very Good
Only 0 left

Oliver and the Noisy Baby Summary

Oliver and the Noisy Baby by Mara Bergman

Oliver's baby sister won't stop crying. Oliver gets in his plane and travels to distant lands to get away from the noise. But wherever he goes, there are babies crying. Oliver wonders if back home HIS sister might need him so he flies back to cuddle her to sleep!

A new story from a talented prize-winning author/illustrator team praised for their rhythmic imaginative texts and gloriously detailed illustrations.

Oliver and the Noisy Baby Reviews

A delightful picture book...strong rhythm and rhyming structure make it great for reading aloud * School Librarian *
A great book to give to a child who is preparing to take on the mantle of big brother or sister * Junior *
Quirky illustrations with original characters let the gentle rhythm of the story unfold with perfect precision...an excellent addition to any family library * Books for Keeps *
verse and illustrations come together to create a rosy vision of family life at its best * Carousel *
Quirky illustrations with original characters let the gentle rhythm of this story unfold with perfect precision. * Books for Keeps *
About Oliver who was small but mighty: Through the terrific rhyming text and bold illustrations Oliver discovers that, though small, he is indeed mighty as he lives through his fears in this glorious, rollicking work of imagination. * Julia Eccleshare, Guardian *
A story with wonderfuflly rhythmic text, lively illustrations and great empathy for young children's fears. * Nursery World *
Oliver who was small by Mighty: Oliver A deliciously funny portrayal of the way that a small child transforms a bath into an epic, it will remind you why keeping at least one pirate boat and a few plastic sharks and dolphins are essential. * Amanda Craig, Times *
A picture book that will no doubt be revisited many times by any child lucky enough to get it. * The Bookseller *
'Small children snug in their own beds will relish such wild journeys by someone the same age as themselves' * Independent on Sunday *
In Oliver Who Would Not Sleep (Hodder GBP10.99), "Oliver Donnington Rimington-Sneep COULDN'T and DIDN'T and WOULD NOT SLEEP!" as a splendidly rhythmic text by Mara Bergman unfolds the story of a boy's imaginative play. He takes a trip to Mars before he settles down. Nick Maland's stylish illustrations add intriguing incident to the tale, using muted colour and lots of pattern. * Nicolette Jones, Times *
'I've left my favourite to last. Oliver Who Would Not Sleep is a tale of a boy for whom bed is the springboard of a restless imagination... Mara Bergmans' verse beings with the jaunty insistence of a nursery rhyme... revs up at blast off, grows quiet for Oliver's contemplation of Mars and then whizzes him back home and puts him gently, gently down to sleep. Nick Maland's illustrations keep pace, and they move the reader skilfully between the sold world of the bedroom and its contents and the porous world of play that Oliver makes for them. * Clive Barnes, Books for Keeps *
Fun illustrations and a clever rhyming text. * Junior *
The pictures are big, bright and enchanting... Bergman's rhyming text is spot on, both catchy and fun and easy to join in with. * Carousel *
This is a delightful picture book. It has a strong rhythm and rhyming stucture which make it great for reading aloud. * School Librarian *
A really good book that you could reread over and over again. * Guardian *

GOR004484219
Oliver and the Noisy Baby by Mara Bergman
Mara Bergman
Oliver
Used - Very Good
Paperback
Hachette Children's Group
2012-03-01
32
034099746X
9780340997468
N/A
Book picture is for illustrative purposes only, actual binding, cover or edition may vary.
This is a used book - there is no escaping the fact it has been read by someone else and it will show signs of wear and previous use. Overall we expect it to be in very good condition, but if you are not entirely satisfied please get in touch with us.