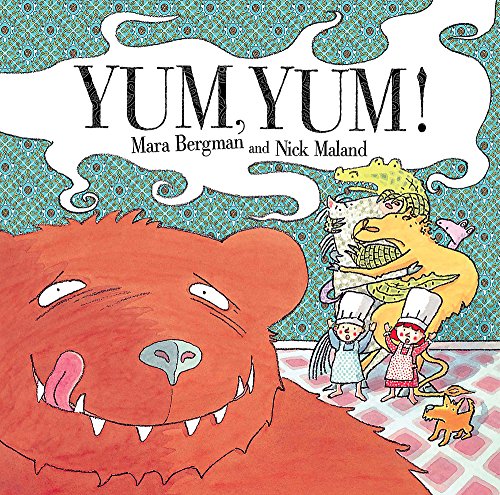 Out of Stock
$34.99
inc. GST
Creak, Crack, Creak Crack. Did anyone see who crept through the window, long and lean, scaly and green? Not Katie, or James or their little dog Harry.
Very Good
Only 0 left

Katie, James and their little dog Harry are in the kitchen baking, and too busy to notice a succession of animals creep in through the window, until Crash Bash, Crash Bash a Bear storms in! A fabulous rhythmic read aloud picture book from the award-winning team behind Snip Snap!

REVIEWS ON SNIP SNAP
Nick Maland's clever perspectives make the alligator increasingly alarming as he swells to fill more and more of the page in this well-created story of facing down fear.

* The Guardian *
Using elements of rhythm and rhyme as well as an enjoyably predicable question-and-answer refrain the text maintains a playful tone beneath the scary details... Expressive line drawings, brightened with watercolour washes, illustrate the story with wit and style... good fun. * Booklist *
Mara Bergman and Nick Mayland tell an amusing and tension-filled tale that turns tail and runs on adrenaline power until the very end. The illustrations add to the appeal of this book. * The Lady *
Here's a picture book which, read aloud, will transform any teacher into a star performer; the fanciful situation, rhythmic text, onomatopoeic words, graphic clues for varying verbal volume and masterly cartooning guarantee this is a class act. The young audience can enjoy a delicious dose of the horrors, while learning that, when afraid, it's best to face up to your fears. * TES *
Deliciously scary, but with the obligatory happy ending, this bold and colourful picture book will be real hit with those coming up to school-age. * Carousel *
While Bergman's rhythmic vocal text propels the story forward, it is Nick Maland's illustrations, watercolour on photocopied drawings, that actually provide the book's suspenseful foundation. * NY Times *
One of CCBC Choices for 2006 (Cooperative Children's Book Center's annual best of the year list. ) * CCBC *
...for its youthful audience it becomes a gripping saga of danger and heroism; children dealing with their own imaginary monsters may benefit from a few storytimes with this lively teaching tale. * Bulletin of the Center for Children's Books. 2005 *
Treats usually disappear quickly, but this one will last through repeated readings. * Publishers Weeky *

GOR005285465
Yum Yum by Mara Bergman
Mara Bergman
Used - Very Good
Hardback
Hachette Children's Group
2009-01-22
32
034093056X
9780340930564
N/A
Book picture is for illustrative purposes only, actual binding, cover or edition may vary.
This is a used book - there is no escaping the fact it has been read by someone else and it will show signs of wear and previous use. Overall we expect it to be in very good condition, but if you are not entirely satisfied please get in touch with us.