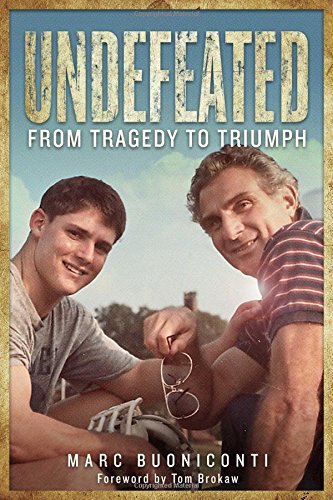 Undefeated: From Tragedy to Triumph by Marc Buoniconti

As seen in Parade magazine and on Fox & Friends!

Marc Buoniconti, son of an NFL Hall of Fame legend Nick Buoniconti, enjoyed an admittedly reckless lifestyle until a paralyzing football injury changed his outlook and pushed him to dedicate himself to helping others.

Hurtling into a tackle, Marc Buoniconti made contact, and then-he felt nothing. He saw an arm flop to the ground and as he struggled to breathe, he became aware whose arm it was: his.

That third-and-one play for The Citadel linebacker began as a game-changing moment but quickly turned life-changing for the son of NFL Hall of Fame legend Nick Buoniconti. On October 26, 1985, Marc was paralyzed for life from the shoulders down, injured in the same fashion as he had lived up to then: recklessly. But the same drive to push the limit in everything he'd encountered, from drugs to skipping school to never backing down from a dare, was the catalyst for Marc's resolve to get off a ventilator, beat the odds, and turn catastrophe into a life of purpose.

His family knew he was the only one of them who could have handled such a challenge. Marc's battle to live a full life was the genesis for nonprofit The Miami Project to Cure Paralysis and The Buoniconti Fund, which to date has raised more than $450 million for research into the treatment of spinal cord and brain injuries. With renewed spirit and commitment refueled, Marc has become the face of The Miami Project. Working with Dr. Barth Green and many others, Marc has led the charge to change the lives of thousands of people who previously had no hope after suffering a similar catastrophic injury.

This is his story.

Born September 29, 1966, in Boston, MA, Marc Buoniconti was the youngest of three children to Terry, a nurse, and Nick, a Hall of Fame linebacker for the Miami Dolphins. Marc excelled in all sports, but particularly in football, and despite a spotty academic record he earned a full scholarship to play at The Citadel in Charleston, SC. It was there in October 1985 that Marc, then a sophomore, suffered a dislocation of the C-3, 4 vertebrae and a severe spinal cord injury that would leave him paralyzed from the shoulders down.

His rehabilitation included learning how to breathe without a ventilator and mastering the breath-controlled wheelchair that provides his only mobility. Marc earned a bachelor's degree in psychology from the University of Miami and then took on the driving purpose in his life-to help those suffering from catastrophic injury-as ambassador and now president of The Miami Project to Cure Paralysis and The Buoniconti Fund. He has served on numerous local, state, and federal committees dedicated to finding a cure, given hundreds of interviews and spoken at countless public appearances.

"My goal," he says, "is to get everyone out of these wheelchairs."

GOR010023893
Undefeated: From Tragedy to Triumph by Marc Buoniconti
Marc Buoniconti
Used - Very Good
Hardback
Permuted Press
2017-09-19
320
1682614573
9781682614570
N/A
Book picture is for illustrative purposes only, actual binding, cover or edition may vary.
This is a used book - there is no escaping the fact it has been read by someone else and it will show signs of wear and previous use. Overall we expect it to be in very good condition, but if you are not entirely satisfied please get in touch with us.