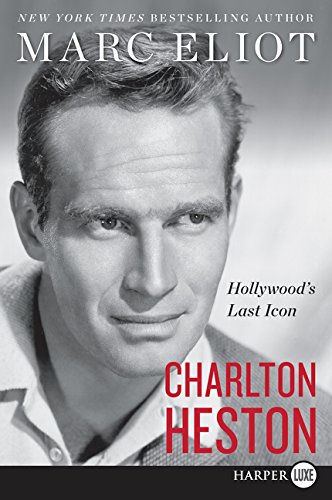 Out of Stock
$43.99
inc. GST
-The award-winning author of Walt Disney draws on firsthand diaries, letters and estate records in a portrait of the Hollywood icon, political activist and NRA president that explores Heston's storied career and role in Hollywood mythology,---NoveList.
Well Read
Only 0 left

This is the first and definitive biography of one of the most iconic, complex and enduring legends of Hollywood's golden age, whose major presence in American film, radio, television, stage and theater lasted beyond the second half of the 20th Century, and whose classic films are known throughout the world.

Eliot's biography is rich with facts details and anecdotal material that bring to life the complex story of this most iconic of American popular cultural giants to illuminate Heston's greatest achievements and his personal failures. He examines how a small boy from the backwoods of Michigan rose to become one of Hollywood's most legendary stars, one of the Greatest Generation's true-life war heroes - he saw action in the Pacific Theater during World War Two, before moving with his young wife from Chicago to New York's Hell's Kitchen to begin their struggle to find success in the theater. Eliot traces Heston's pioneering work in live television, his being discovered by Hollywood because of it, and tells the amazing saga of his three films for Cecil B. DeMille and his two for William Wyler, including The Ten Commandments and Ben-Hur, the latter for which he won a Best-Actor Oscar, with fascinating new details, documents and photographs never before seen. Eliot follows Heston through the genre of Science Fiction, which he helped revive with Planet of the Apes, and sheds new light on every one of Heston's iconic films. He also examines Heston's long political involvements, from boom one of the organizers of Hollywood's faction of marchers who joined with Martin Luther King, Jr. for the March on Washington, to his mentoring under Ronald Reagan for eventual presidency of the Screen Actors Guild, to his late-in-life presidency of, the National Rifle Association, all the while refusing the Republican Party's continual pleas for him to run for president of the United States after Reagan.

"An entertaining picture of a complicated cinema icon."--Kirkus Reviews
" Charlton Heston: Hollywood's Last Icon follows the iconic late actor's life and career in intimate detail, thanks to author Marc Eliot's unprecedented access to his personal journals and estate."--Parade
"The book covers [Heston's] personal and professional lives in equal measure, and there are plenty of behind-the-scenes stories for the movie buffs in the crowd. Another winner from a dependable biographer."--Booklist
"A welcome event if only because it restores a sense of balance, offering some overdue appreciation to an actor whose belief system mitigated against a full appreciation of his worth."--Wall Street Journal
"Marc Eliot's insightful biography provides an admiring yet even-handed reassessment long overdue for one of Hollywood's most popular stars."--Lisa Ko, author of The Leavers

Marc Eliot is the New York Times bestselling author of more than two dozen books on popular culture, among them the highly acclaimed Cary Grant, the award-winning Walt Disney: Hollywood's Dark Prince, and American Rebel: The Life of Clint Eastwood. His work has been published in more than twenty-five languages, and he writes for a number of publications and frequently speaks about film to universities and film groups, and on radio and television.

GOR010215909
Charlton Heston: Hollywood's Last Icon by Marc Eliot
Marc Eliot
Used - Well Read
Paperback
Newbury House Publishers,U.S.
2017-04-14
928
0062644459
9780062644459
N/A
Book picture is for illustrative purposes only, actual binding, cover or edition may vary.
This is a used book. We do our best to provide good quality books for you to read, but there is no escaping the fact that it has been owned and read by someone else previously. Therefore it will show signs of wear and may be an ex library book.