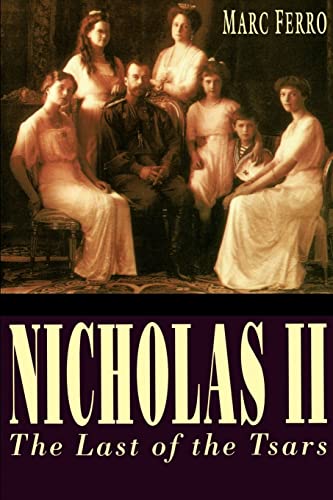 Nicholas II: Last of the Tsars
by Marc Ferro

Used Price
$43.99
inc. GST
Free Shipping in Australia
A figure surrounded by myth and speculation, at the center of one of history's most cataclysmic events--the Russian Revolution--Nicholas II remains haunting and enigmatic. Now one of France's most eminent historians presents a biography that goes beyond the lies and half-lies surrounding Nicholas's reign to provide an evocative portrait of this most mysterious ruler. Illustrations.
Reviews:
Trustpilot
Very Good

Nicholas II: Last of the Tsars by Marc Ferro

One of the world's preeminent historians, Marc Ferro is a leading member of the Annales School of France and a recognized authority on early twentieth-century European history. For well over two decades, in volumes such as The February Revolution of 1917 and October 1917, he has demonstrated an unsurpassed skill in capturing the social and political forces that led to the Russian Revolution. Now Ferro turns his considerable talents to the biography of one of the pivotal figures of that era, Nicholas II, the last Tsar of Russia.
For this important new biography, Ferro has searched extensively in Russian archives to illuminate Nicholas's character. What emerges is a vivid portrait of a reluctant leader, a young man forced by the death of his father into a role for which he was ill-equipped. A conformist and traditionalist, Nicholas admired the order, ritual, and ceremony identified with the intangible grandeur of autocracy, and he hated everything that might shake that autocracy--the intelligentsia, the Jews, the religious sects. His reign, as Ferro documents, was one of continual trouble: a humiliating war with Japan; the 1905 revolution that forced Nicholas to accept a constitutional assembly, the Duma; the international crisis of 1914, leading to World War I; and finally the Revolution of 1917, forcing his abdication. Throughout, we see a Tsar who was utterly opposed to change and to the ferment of ideas that stirred his country, who felt it was his duty to preserve intact the powers God had entrusted in him. Ferro also provides an intimate portrait of Nicholas's personal life: his wife Alexandra; his four daughters, Olga, Tatiana, Maria, and Anastasia, sisters so close they signed letters "OTMA," the initials of their Christian names; his son and heir Alexis, who suffered from hemophilia; and the various figures in the court, most notably Rasputin, whose ability to revive the frequently ailing Alexis made him indispensable to the Tsaritsa. (Ferro recounts that, when Alexandra heard of Rasputin's murder, she collapsed in anguish, certain her son was lost; but when Nicholas heard the news while with the army, he simply walked off whistling cheerfully.) Perhaps most intriguing is Ferro's chapter on the fate of the Tsar and his family, examining all the rumors and contradictory testimony that swirl around this still cloudy event. Ferro concludes that Alexandra and her daughters may have survived the revolution, and the woman who later surfaced in Europe claiming to be Anastasia may well have been so.
This authoritative biography by one of the world's great historians shines a bright light on an ordinary man raised to an extraordinary station, who carried an unwanted burden, which crushed him.

"Upon a well-conceived framework Ferro hangs telling and even colorful detail, resulting in a sound biography of wide appeal."--Booklist
"The indefinable French spirit of the book is striking and will engage students."--Francie B. Randall, Sarah Lawrence College
"A good, readable biography and introduction to early 20th century Russian history."--Barbara T. Norton, Widener University
"Skillfully quoting from numerous letters and diaries, Ferro reconstructs the essential Nicholas."--Library Journal

Marc Ferro is Director of Studies in Social Sciences at the Ecole des Hautes Etudes in Paris. He is the author most recently of The Russian Revolution and The Great War.

GOR004840293
Nicholas II: Last of the Tsars by Marc Ferro
Marc Ferro
Used - Very Good
Paperback
Oxford University Press
1995-12-31
315
0195093828
9780195093827
N/A
Book picture is for illustrative purposes only, actual binding, cover or edition may vary.
This is a used book - there is no escaping the fact it has been read by someone else and it will show signs of wear and previous use. Overall we expect it to be in very good condition, but if you are not entirely satisfied please get in touch with us.