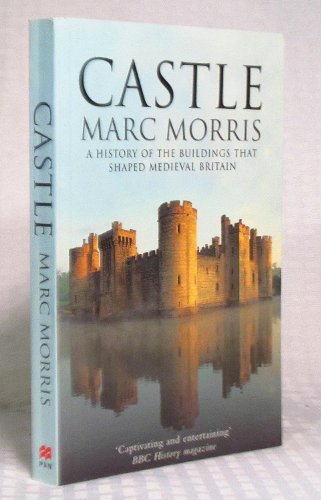 In Stock
$22.99
+10% GST
A unique look at the history of some of most treasured castles in Britain.
Very Good
Only 1 left

Castle is an enlightening look at the origins, development and decline of castles in Britain. A real castle is a fortress and a stately home all rolled into one. This is part of what makes these extraordinary structures so fascinating - they are a product of two contradictory impulses - to be warlike and homely at the same time.

The castle occupies an easily definable place in British history - introduced to Britain as a result of the Norman Conquest in 1066, it was not until the middle of the seventeenth century, as a result of the English Civil War, that castles were destroyed and abandoned on a large scale and the story draws to a close.

Medieval historian and presenter Marc Morris focuses on a range of castles across England, Scotland and Wales, and explores their humble origins as timber buildings to the development of stone towers and keeps used in siege warfare. Among the castles featured are the tower of London, Dover, Rochester, Caerphilly, Caernarfon, Rhuddlan, Bodiam, Threave, Borthwick, Urquhart, Raglan and Pontefract. He also uncovers the lives of the inhabitants, examining the peculiarities of domestic life in a castle and the workings of an aristocratic household.

Castle brings back to life the kings and queens, damsels and knights, sieges and tournaments that were once a part of these magical buildings.

Marc Morris is a medieval historian and TV presenter, and is being groomed as a new leading light in the Channel 4 firmament.

GOR001646577
Castle by Marc Morris
Marc Morris
Used - Very Good
Paperback
Pan Macmillan
2004-04-02
288
033043246X
9780330432467
N/A
Book picture is for illustrative purposes only, actual binding, cover or edition may vary.
This is a used book - there is no escaping the fact it has been read by someone else and it will show signs of wear and previous use. Overall we expect it to be in very good condition, but if you are not entirely satisfied please get in touch with us.