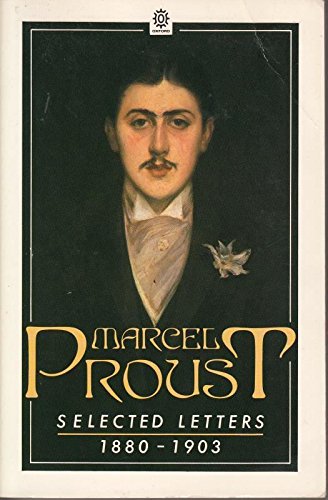 In 1904, while still working on his translations of Ruskin, Marcel Proust wrote to Maurice Barr s "I still have two Ruskin's to do, and after that I shall try to translate my own poor soul, if it doesn't die in the meantime." Within a few years Proust would begin this translation of his "own poor soul"--the monumental Remembrance of Things Past, one of the great literary works of the 20th century.
In this volume of Proust's collected letters--translated by Terence Kilmartin, acclaimed for his work on the Moncrieff translation of Proust's works--the reader is carried inside this pivotal moment in a great writer's life. In a letter to Louis d'Albufera he lists the projects he has in hand: "a study on the nobility, a Parisian novel, an essay on Sainte-Beuve and Flaubert, an essay on Women, an essay on Pederasty (not easy to publish), a study on stained-glass windows, a study on tombstones, a study on the novel"--all subjects that eventually found their way into Remembrance of ThingsPast. The final letter in the volume talks of alterations to his flat "which are essential for my peace and quiet"--an allusion no doubt to the cork-lined room in which he would spend so many years continuing to pursue his quest for "Lost Time."
The letters are intriguing for what they say about the work, but they also offer an intimate portrait of the man--the sometime invlaid recluse, sometime socialite. Although Proust spent a great deal of time insulated at home, when he does go out it is clear that the talent for malicious observation so evident in Guermantes Way was already quite sharp. He refers to a group of dowagers he'd seen at a concert as "portraits of monsters from the time when people didn't know how to draw." And his letters to his devoted friend the composer Reynaldo Hahn are full of wit, scurrilous gossip and a great deal of teasing. He also carries on lively exchanges with two very different women--Marie Nordlinger, a serious, dedicated artist, and Louisa de Mornand, a frivolous, mercenary actress. His letters to Marie are affectionate, but his letters to Louisa are amorous--sometimes even salacious, (possibly because she served as a surrogate for his real interst, her lover Albufera.) Proust's celebrated devotion to his mother is also evident in this collection. Theirs is an intimate and loving correspondence, and her death in 1905 is clearly a tremendous blow ("My life has now forever lost its only purpose, its only sweetness, its only consolation.")
This long-awaited volume will be welcomed by scholars and general readers alike. The letters offer a special insight into the man and his art during a crucial period, and they are as delightful to read--as beautifully crafted, witty and poignant--as his fiction.

About the translator
Terence Kilmartin was literary editor of the Observer from 1952 until 1987. His revision of Scott Moncrieff's translation of Remembrance of Things Past(1981) was widely acclaimed. He has also translated books by Henry de Montherlant, Malraux and de Gaulle.

GOR010390887
Selected Letters: v. 1: 1880-1903 by Marcel Proust
Marcel Proust
Oxford Paperbacks
Used - Like New
Paperback
Oxford University Press
1985-11-30
404
0192818929
9780192818928
N/A
Book picture is for illustrative purposes only, actual binding, cover or edition may vary.
The book has been read, but looks new. The book cover has no visible wear, and the dust jacket is included if applicable. No missing or damaged pages, no tears, possible very minimal creasing, no underlining or highlighting of text, and no writing in the margins.