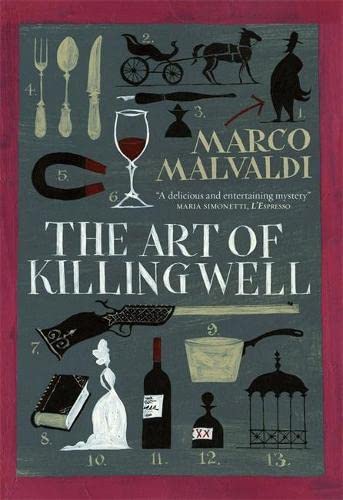 The Art of Killing Well
by Marco Malvaldi

The Art of Killing Well Summary

The Art of Killing Well by Marco Malvaldi

Nothing could please a chef more than a chance to learn the secrets of a Baron's castle kitchen. Having travelled the length and breadth of the country compiling his masterpiece, The Science of Cooking and The Art of Eating Well, Pellegrino Artusi relishes the prospect of a few quiet days and a boar hunt in the Tuscan hills.

But his peace is short-lived. A body is found in the castle cellar, and the local inspector finds himself baffled by an eccentric array of aristocratic suspects. When the baron himself becomes the target of a second murder attempt, Artusi realises he may need to follow his infallible nose to help find the culprit.

Marco Malvaldi serves up an irresistible dish spiced with mischief and intrigue, and sweetened with classical elegance and wit. His stroke of genius is to bring Italy's first cookery writer to life in this most entertaining of murder mysteries.

The Art of Killing Well Reviews

'Matthew Dennison's rich and compelling account challenges the accepted version of Augustus's wife as the viper in the nest... What emerges is a broader and thoroughly compelling account of the beginning of the Julio-Claudian dynasty as it seized and maintained power for itself and the empire. Dennison possesses the magical ability to make us see that the Romans were like us. They laughed at new money, sniggered over sexual misdemeanours, bore petty grudges. They had laws, baths, literature and a disciplined army. And yet they were almost unimaginably different. Dennison recreates ancient Rome and the mindset of its inhabitants as an alien world.
It is a city conveyed through the senses, beginning with a marvelous account of the birth of a child into an elite family against a background of smoke, sacrifice, and the melting wax of ancestral masks.' Financial Times.

Marco Malvaldi was born in Pisa in 1974, and is both a crime novelist and a chemist. He is best known for his BarLume series set on the Tuscan Coast, and also for The Art of Killing Well, for which he was awarded both the Isola d'Elba Award and the Castiglioncello Prize.

Howard Curtis is a prolific translator of Italian, French and Spanish fiction. He has won several awards, and has been twice nominated for the Independent Foreign Fiction Prize.

GOR005767486
The Art of Killing Well by Marco Malvaldi
Marco Malvaldi
Used - Very Good
Hardback
Quercus Publishing
2014-06-01
192
0857052942
9780857052940
N/A
Book picture is for illustrative purposes only, actual binding, cover or edition may vary.
This is a used book - there is no escaping the fact it has been read by someone else and it will show signs of wear and previous use. Overall we expect it to be in very good condition, but if you are not entirely satisfied please get in touch with us.