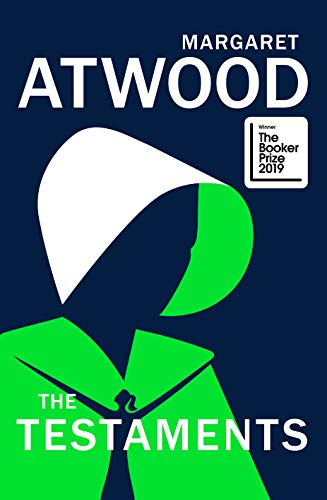 The Testaments
by Margaret Atwood

The Testaments: WINNER OF THE BOOKER PRIZE 2019 by Margaret Atwood

Margaret Atwood's dystopian masterpiece, The Handmaid's Tale, is a modern classic. Now she brings the iconic story to a dramatic conclusion in this riveting sequel.

More than fifteen years after the events of The Handmaid's Tale, the theocratic regime of the Republic of Gilead maintains its grip on power, but there are signs it is beginning to rot from within. At this crucial moment, the lives of three radically different women converge, with potentially explosive results.

Two have grown up as part of the first generation to come of age in the new order. The testimonies of these two young women are joined by a third voice: a woman who wields power through the ruthless accumulation and deployment of secrets.

As Atwood unfolds The Testaments, she opens up the innermost workings of Gilead as each woman is forced to come to terms with who she is, and how far she will go for what she believes.

'Dear Readers: Everything you've ever asked me about Gilead and its inner workings is the inspiration for this book. Well, almost everything! The other inspiration is the world we've been living in.' Margaret Atwood

Thrilling and blistering * Daily Telegraph *
An incredible follow-up * the Sun, *Pick of the Week* *
Gripping, pacy and beautifully written -- Justine Jordan * Guardian *
Finding hope in a hopeless place, this is everything The Handmaid's Tale fans wanted and more. Prepare to hold your breath throughout, and to cry real tears at the end. My book of the year -- Kayleigh Dray * Stylist *
The Testaments is Atwood at her best, in its mixture of generosity, insight and control. The prose is adroit, direct, beautifully turned. All over the reading world, the history books are being opened to the next blank page and Atwood's name is written at the top of it. To read this book is to feel the world turning -- Anne Enright * Guardian *
I gobbled it down... Atwood has an incredible intellectual nimbleness that challenges us constantly and poses the question that lies like a pearl inside the shell of this frighteningly readable novel, "Before you sit in judgement, how would you behave in Gilead?" -- Allison Pearson * Sunday Telegraph *
No one needs another recommendation for The Testaments and still I have to say how thrilling it is when a book manages to exceed all expectations. How did she manage to make darkness feel so effortless? How did she think to inject humour where no humour should exist? Because she's Margaret Atwood, and she can do anything -- Ann Patchett
A cracker: urgent, moving and as tense as any thriller... there's a darkly rebellious humour, ingenious wordplay and, of course, chillingly timely warnings. Atwood is long overdue a Nobel -- Hepzibah Anderson * Mail on Sunday *
At its heart, this gripping novel is a rallying call for action... In Atwood's world, resistance is never futile -- Mernie Gilmore * Daily Express *
The must-read novel of the year -- a perfect gift for bookworms and fans of the TV series * Sunday Telegraph *
Believe the reviews, it is remarkable -- Lindsay Woods * Irish Examiner *
A plump, pacy, witty and tightly plotted page-turner that transports us straight back to the dark heart of Gilead... Atwood is on top form -- Julie Myerson * Observer *
The Testaments is that elusive dream of a book -- an erudite, accessible, highly readable adventure, that brims with ideas but never lets them get in the way of the story -- Cathy Rentzenbrink * Prospect *
While unflinching in depicting horror and showing how complicity enables the collapse of compassion, The Testaments is also a clarion call to hope, resistance and activism... a formidable achievement that will doubtless be read in decades to come -- Anita Sethi * i news *
With surgical clarity, Atwood documents how the stripping of fundamental freedoms, the weight of systemic oppression, pushes individuals to extremes... The pacing is flawless. The prose is lean, mean, and charged -- David Canfield * Entertainment Weekly *

GOR010058106
The Testaments: WINNER OF THE BOOKER PRIZE 2019 by Margaret Atwood
Margaret Atwood
Used - Very Good
Hardback
Vintage Publishing
2019-09-10
432
1784742325
9781784742324
Joint winner of Booker Prize 2019
Book picture is for illustrative purposes only, actual binding, cover or edition may vary.
This is a used book - there is no escaping the fact it has been read by someone else and it will show signs of wear and previous use. Overall we expect it to be in very good condition, but if you are not entirely satisfied please get in touch with us.