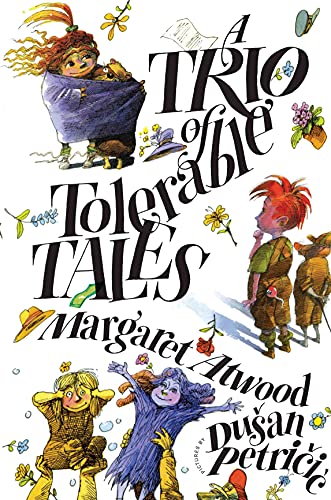 A Trio of Tolerable Tales
by Margaret Atwood

A Trio of Tolerable Tales Summary

A Trio of Tolerable Tales by Margaret Atwood

Wordplay and outrageous adventures rule the day in these three humorous stories from Margaret Atwood, with illustrations by Dusan Petricic. Now published together in a chapter book for the first time!

In Rude Ramsay and the Roaring Radishes, Ramsay runs away from his revolting relatives and makes a new friend with more refined tastes.

The second tale, Bashful Bob and Doleful Dorinda, features Bob, who was raised by dogs, and Dorinda, who does housework for relatives who don't like her. It is only when they become friends that they realize they can change their lives for the better.

And finally, to get her parents back, Wenda and her woodchuck companion have to outsmart Widow Wallop in Wandering Wenda and Widow Wallop's Wunderground Washery.

Young readers will become lifelong fans of Margaret Atwood's work and the kind of wordplay that makes these tales such rich fare, whether they are read aloud or enjoyed independently. These compelling stories of resourceful children are a lively introduction to alliteration.

A Trio of Tolerable Tales Reviews

Praise for A Trio of Tolerable Tales

"The exaggerated humor and outlandish situations call to mind Roald Dahl, but the hilarity in this alliterative tour de force is all its own. Fine exercise for stretching linguistic muscles; great fun for reading aloud." - Kirkus, STARRED REVIEW

"The wide and varied vocabulary will enrich even the most erudite student; an excellent and unusual addition to most collections." - School Library Journal

"Readers encountering these delightfully peculiar stories for the first time will be impressed by just how far Atwood runs with the alliteration, and despite what the title suggests, these tongue-twisting tales are far better than tolerable-they're truly tickling." - Publishers Weekly

Praise for Rude Ramsay and the Roaring Radishes

"In lesser hands, such an extended use of alliteration might prove redundant, but Atwood's prose is both amusing and enlightening in its use of rich vocabulary, with phrases such as 'rumpled rucksack,' 'raggedy ravens' and 'rancid remnants of reeking rhinoceros.'" - Kirkus Reviews

"Wandering Wenda offers young readers a whimsical story about a girl searching for her missing parents. Atwood's use of alliteration is an absolute delight. The playful nature of the text will captivate readers right from the beginning. They are sure to devour this tale just to see if the wordplay lasts until the very end." - CM Magazine

Margaret Atwood is the author of more than forty books of fiction, poetry and critical essays. Her most recent books include the novel The Heart Goes Last (2015) and a collection of short stories called Stone Mattress: Nine Tales (2014). Forthcoming in 2016 are Hag-Seed, a novel revisitation of Shakespeare's play The Tempest, and Angel Catbird featuring a cat-bird superhero a graphic novel with co-creator Johnnie Christmas. She is a two-time winner of the Governor General's Award, has won the Man Booker Award and was inducted into Canada's Walk of Fame. Margaret Atwood lives in Toronto with writer Graeme Gibson.

Dusan Petricic is the award-winning illustrator of more than twenty books for children. Most recently, he has illustrated Snap! by Hazel Hutchins, Invisibill by Maureen Fergus and My Family Tree and Me, which he also wrote. Mr. Zinger's Hat, written by Cary Fagan, was selected for the 2015 TD Grade One Book Giveaway. A former professor of illustration and book design, Petricic's work appeared for years in the New York Times, Scientific American, the Wall Street Journal and the Toronto Star. He continues to work as a political cartoonist for Politika and to illustrate for American, Canadian and Serbian magazines. He lives in Belgrade and Toronto.

GOR009821394
A Trio of Tolerable Tales by Margaret Atwood
Margaret Atwood
Used - Very Good
Hardback
Groundwood Books Ltd ,Canada
2017-06-01
52
1554989337
9781554989331
N/A
Book picture is for illustrative purposes only, actual binding, cover or edition may vary.
This is a used book - there is no escaping the fact it has been read by someone else and it will show signs of wear and previous use. Overall we expect it to be in very good condition, but if you are not entirely satisfied please get in touch with us.