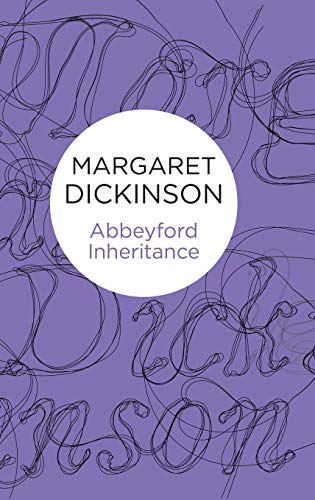 Used Price
$32.99
inc. GST
Free Shipping in Australia
The second book in the Abbeyford Trilogy from the author of Fairfield Hall and The Clippie Girls
Reviews:
Trustpilot
Good

Set twenty years after the dramatic events that unfolded in Abbeyford, Abbeyford Inheritance is the second volume in the moving and powerful saga from Margaret Dickinson.

Lynwood felt a strange constriction in his chest. No! No - it wasn't possible! Caroline had come back . . .

But this is 1815; Caroline had eloped in disgrace twenty years earlier, and the girl now standing before him speaks with a low husky drawl and an accent from America.

Adelina Cole. Her daughter. Returned to Abbeyford in search of a grandfather she has never seen, and the estate which she, as closest living relative, has every right to inherit. Except that Lord Royston cannot bring himself to see Adelina - her disturbing beauty reminds too many people of the past.

Reluctantly taken in by distant cousins, Adelina believes she has found an ally in Emily Langley and her betrothed, the handsome, ruthless Wallis Trent. A man with old scores to settle, Trent knows Lord Royston altered his will to make Emily the main beneficiary. But Adelina's return changes everything - perhaps now his hand may be more profitably played elsewhere?

And there is Francis, Earl of Lynwood - the man who first discovered Adelina. He once adored her mother and now cannot forget the face which threatens his peace of mind again . . .

Born in Gainsborough, Lincolnshire, Margaret moved to the coast at the age of seven and so began her love for the sea and the Lincolnshire landscape. Her ambition to be a writer began early and she had her first novel published at the age of twenty-five. She has written over thirty novels, many of which are set in the heart of her home country. A visit to the wonderful National Tramway Museum in Crich, Derbyshire, inspired The Clippie Girls, and the magnificent Gunby Hall, Lincolnshire, was the inspiration for Fairfield Hall.

GOR010829929
Abbeyford Inheritance by Margaret Dickinson
Margaret Dickinson
Abbeyford Trilogy
Used - Good
Hardback
Pan Macmillan
2014-11-20
166
1447290267
9781447290261
N/A
Book picture is for illustrative purposes only, actual binding, cover or edition may vary.
The book has been read but remains in clean condition. All pages are intact and the cover is intact. Some minor wear to the spine.