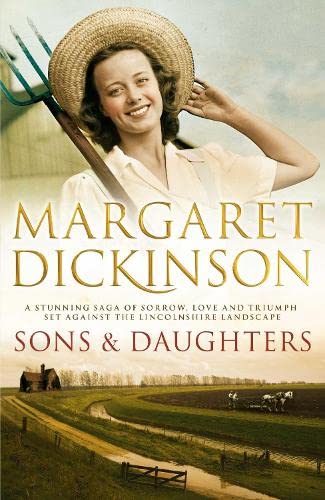 Sons and Daughters
by Margaret Dickinson

Out of Stock
$14.49
inc. GST
A stunning saga of sorrow, love and triumph set against the Lincolnshire landscape
Very Good
Only 0 left

Sons and Daughters by Margaret Dickinson

Charlotte is an only child, reared by a brutal father who cannot forgive her for not being the son he desires. Loved by most that she meets, Charlotte has a gift for friendship, and it is her work as a Sunday School teacher that gives her hope - and an escape from home.

When Charlotte meets Miles Thornton, she is instantly drawn to him. He is new to the area and a widower, with three lovely young sons to look after but the one thing he has longed for is a daughter. As they grow to understand one another, it seems that Miles and Charlotte have more in common that meets the eye...

Sweeping from the early 1920s through to the end of World War II, SONS AND DAUGHTERS is a compelling, traditional saga set against the Lincolnshire landscape that Margaret Dickinson portrays so well.

Born in Gainsborough, Lincolnshire, Margaret Dickinson moved to the coast at the age of seven and so began her love for the sea and the Lincolnshire landscape. Her ambition to be a writer began early and she had her first novel published at the age of twenty-five. This was followed by many further titles including Plough the Furrow, Sow the Seed and Reap the Harvest, which make up her Lincolnshire Fleethaven Trilogy. She is also the author of Fairfield Hall, Jenny's War and The Clippie Girls. Margaret is a Sunday Times Top Ten bestseller.

GOR001726932
Sons and Daughters by Margaret Dickinson
Margaret Dickinson
Used - Very Good
Paperback
Pan Macmillan
2010-03-03
512
0330516175
9780330516174
Long-listed for RoNA Romantic Novel of the Year Award 2011 (UK)
Book picture is for illustrative purposes only, actual binding, cover or edition may vary.
This is a used book - there is no escaping the fact it has been read by someone else and it will show signs of wear and previous use. Overall we expect it to be in very good condition, but if you are not entirely satisfied please get in touch with us.