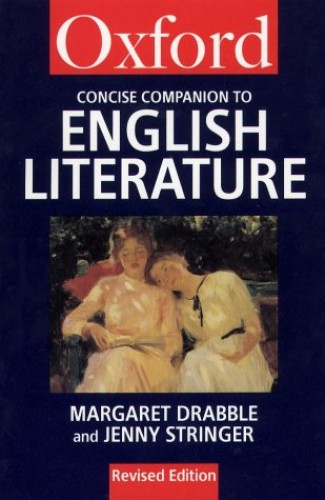 The Concise Oxford Companion to English Literature
by Margaret Drabble

Used Price
17,19 $
inc. GST
Free Shipping in Australia
Based on "The Oxford Companion to English Literature", this compact guide has been revised to include updated material on all existing entries, plus 60 new entries on contemporary writers. New appendices list the winners of the major literary prizes, including the Nobel, Pulitzer and Booker prizes.
Very Good

The Concise Oxford Companion to English Literature by Margaret Drabble

Based on the bestselling Oxford Companion to English Literature , this is an indispensable, compact guide to all aspects of English literature. For this revised edition, existing entries have been fully updated and 60 new entries have been added on contemporary writers, such as Peter Acroyd, Martin Amis, Toni Morrison, and Jeanette Winterson. Detailed new appendices include a chronology of English literature, and a listing of major literary prizes-winners. * Over 5,000 entries on the lives and works of authors, poets, and playwrights * Character entries and plot summaries * Literary movements, critics, and critical theories * Generous coverage of the literatures of other countries * New appendices listing literary prize-winners - including the Nobel, Booker, and Pulitzer prizes New entries: ACKROYD, Peter; AMIS, Martin; BANKS, Iain; BANKS, Lynne Reid; BANVILLE, John; BARNES, Julian; BAWDEN, Nina; BOYD, William; BRINK, Andre; BROOKNER, Anita; CAREY, Peter; CARTER, Angela; CHATWIN, Bruce; COETZEE, J. M.; COPE, Wendy; DAHL, Roald; DAVIES, W. This book is intended for students of English Literature from sixth form level upwards; anyone with an interest in English.

It earns its place at the head of the best sellers: every home should have one. Sunday Times a magisterial and monumental achievement Literary Review

About the Editors:
Margaret Drabble is one of modern Britain's most distinguished novelists. Her books include The Middle Ground, The Realms of Gold, The Ice Age, and A Writer's Britain. Jenny Stringer was an assistant editor of The Oxford Companion to English Literature, Fifth Edition and has since contributed to and edited several other reference works.

GOR001717171
The Concise Oxford Companion to English Literature by Margaret Drabble
Margaret Drabble
Oxford Paperback Reference
Used - Very Good
Paperback
Oxford University Press
1996-09-01
670
0192800396
9780192800398
N/A
Book picture is for illustrative purposes only, actual binding, cover or edition may vary.
This is a used book - there is no escaping the fact it has been read by someone else and it will show signs of wear and previous use. Overall we expect it to be in very good condition, but if you are not entirely satisfied please get in touch with us.