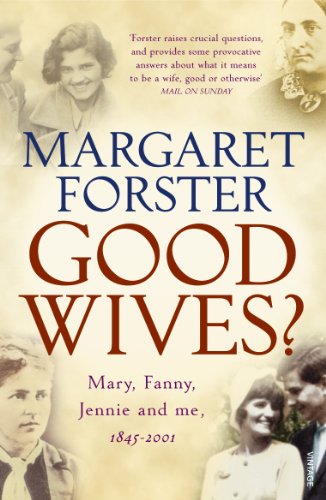 In Stock
$17.49
inc. GST
The bestselling author of Hidden Lives explores four marriages, including her own, in different times and societies to find the answer. Between these two marriages is a huge gulf in which the notion of marriage changed immeasurably.
Very Good
11 in stock

What is a 'good wife'? The bestselling author of Hidden Lives explores four marriages, including her own, in different times and societies to find the answer. In 1848 Mary Moffatt became the wife of the missionary and explorer David Livingstone - and her obedience and devotion eventually killed her. In 1960, Margaret Forster married her school sweetheart Hunter Davies in a London Registry Office - and interpreted the role very differently. Between these two marriages is a huge gulf in which the notion of marriage changed immeasurably. Forster traces the shift in emphasis from submission to partnership, first through the marriage of one unconventional American, Fanny Osbourne, to Robert Louis Stevenson, in the late nineteenth century; and then through that of Jennie Lee to Aneurin Bevan in the 1930s. Why does a woman still want to be a wife in the twenty-first century? What is the value of marriage today? Why do couples still marry in church? These are some of the questions Forster asks as she weaves the personal experience of forty years through the stories of three wives who have long fascinated her.

"Forster gives a fascinating and eminently readable account of these women's lives and their marriages, and in doing so raises many questions regarding the changing relationship between the sexes" * Spectator *
"The star...emerges as Forster herself" * Times Literary Supplement *
"Lively and highly enjoyable" * Sunday Telegraph *
"Fascinating, compellingly written" * Independent *
"Forster raises crucial questions, and provides some provocative answers about what it means to be a wife, good or otherwise" * Mail on Sunday *

Born in Carlisle, Margaret Forster was the author of many successful and acclaimed novels, including Have the Men Had Enough?, Lady's Maid, Diary of an Ordinary Woman, Is There Anything You Want? , Keeping the World Away, Over and The Unknown Bridesmaid. She also wrote bestselling memoirs - Hidden Lives, Precious Lives and, most recently, My Life in Houses - and biographies. She was married to writer and journalist Hunter Davies and lived in London and the Lake District. She died in February 2016, just before her last novel, How to Measure a Cow, was published.

GOR000298425
Good Wives by Margaret Forster
Margaret Forster
Used - Very Good
Paperback
Vintage Publishing
2002-10-03
368
0099283778
9780099283775
N/A
Book picture is for illustrative purposes only, actual binding, cover or edition may vary.
This is a used book - there is no escaping the fact it has been read by someone else and it will show signs of wear and previous use. Overall we expect it to be in very good condition, but if you are not entirely satisfied please get in touch with us.