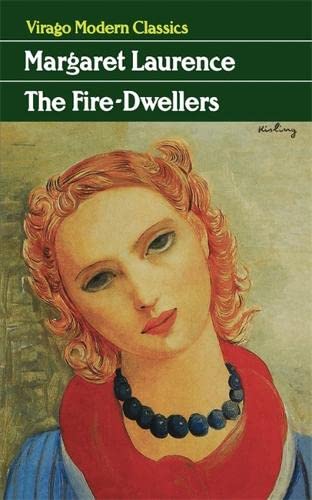 The Fire-Dwellers by Margaret Laurence

Stacey is 39, the mother of four children and the wife of a salesman. Her marriage has worn threadbare and behind its suburban facade she questions herself and berates a Creator she alternately trusts and doubts. This is the third book in the "Manawaka series".

The Fire-Dwellers by Margaret Laurence

Okay God, say what you like, but I damn well wish I could get away just sometimes by myself. But no. It's a criminal offense, nearly. What makes any of them think they've got the right to tell me, own me, always have me there.'
Stacey, aged thirty-nine, looks at the unmade bed, the pile of laundry - perhaps everything would be alright if she were better educated, or if she were beautiful, or slimmer? Her marriage has worn threadbare, the children are growing up, and beneath the suburban facade of salesman's wife and competent mother, Stacey questions herself and berates a Creator she trusts and doubts by turns. Feeling inadequate and rebellious, she retaliates by finding another, younger man. The excitement of the affair is palpable, but its benefits are short-lived; drink satisfies another kind of craving, but bottles run dry without offering a real solution. The only way Stacey can resolve her crisis is by understanding the woman she sees in the mirror... Written in Margaret Lawrence's original and distinctive style, this is a compassionate exploration of an all too familiar dilemma.

Margaret Laurence (1926-1987) grew up in a small prairie town in Canada. She lived in Africa and then England where she wrote her famous Manawaka series, of which The Diviners is the last volume, and The Stone Angel the first.
GOR001413561
The Fire-Dwellers by Margaret Laurence
Margaret Laurence
Virago Modern Classics
Used - Very Good
Paperback
Little, Brown Book Group
1988-09-12
288
0860688224
9780860688228
N/A
Book picture is for illustrative purposes only, actual binding, cover or edition may vary.
This is a used book - there is no escaping the fact it has been read by someone else and it will show signs of wear and previous use. Overall we expect it to be in very good condition, but if you are not entirely satisfied please get in touch with us.
Trustpilot