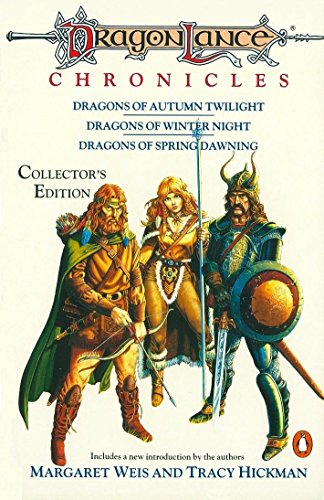 Used Price
$55.99
inc. GST
Free Shipping in Australia
Collects the books that began the 'dragonlance' saga. This title is suitable for readers who like the fantasy world of Krynn.
Reviews:
Trustpilot
Very Good

More than three million readers have witnessed the return of the dragons... And now the books that began the best-selling "dragonlance" saga are collected in their entirety in this special edition, along with all of the artwork from the trilogy. This splendid collector's edition is a must for the millions of readers who fell in love with the fantasy world of Krynn.

Date- 2013-08-06
Born in Independence, Missouri, Margaret Weis graduated from the University of Missouri and worked as a book editor before teaming up with Tracy Hickman to develop the Dragonlance novels. Margaret lives in a renovated barn in Wisconsin with her daughter, Elizabeth Baldwin, and her three cats. She enjoys reading (especially Charles Dickens), opera and rollerskating.

Born in Salt Lake City, Tracy Hickman resides in Wisconsin in a 100-year-old Victorian home with his wife and four children. When he isn't reading or writing, he is eating or sleeping. On Sundays, he conducts the hymns at the local Mormon church.

Margaret Weis is the award-winning co-creator and co-author of the bestselling Dragonlance, Darkswood, and Death Gate sagas. The Dragonlance trilogies have been translated into many languages, including German, Japanese, Danish, Finnish, Spanish, French, Italian, Hebrew, Hungarian, Chine and Portuguese, and have sold more than 20 million copies.In total, Weis has written over 30 books. Other published fantasy works include Rose of the Prophet and the Sovereign Stone trilogy. Science fiction titles include he own series, Star of the Guardian, and the Mag Force 7 series.Weis lives in Williams Bay, Wisconsin, and has recently completed the second book in the Dragonvarld, The Dragon's Son.

GOR001337921
Dragonlance Chronicles: Dragons of Autumn Twilight, Dragons of Winter Night, Dragons of Spring Dawnin by Margaret Weis
Margaret Weis
Used - Very Good
Paperback
Penguin Books Ltd
1988-10-17
1056
0140115404
9780140115406
N/A
Book picture is for illustrative purposes only, actual binding, cover or edition may vary.
This is a used book - there is no escaping the fact it has been read by someone else and it will show signs of wear and previous use. Overall we expect it to be in very good condition, but if you are not entirely satisfied please get in touch with us.