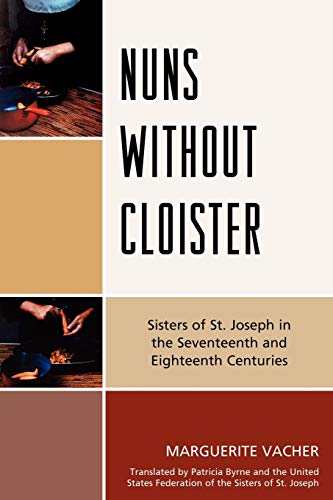 Nuns Without Cloister
by Marguerite Vacher

In Stock
$17.49
+10% GST
Nuns Without Cloister explores one of the first and most innovative among the non-cloistered women's congregations established after the Council of Trent.
Very Good
Only 1 left

Nuns Without Cloister: Sisters of St. Joseph in the Seventeenth and Eighteenth Centuries by Marguerite Vacher

Nuns Without Cloister explores one of the first and most innovative among the non-cloistered women's congregations established after the Council of Trent. Under the aegis of a Jesuit missionary, the first Sisters of St. Joseph envisioned a direct role for religious women in the secular society of mid-seventeenth century France and quietly broke the ecclesiastical and cultural barriers that opposed it. This book opens perspectives on the sisters' success through a politics of discretion and the introduction of creative variety in their lives in country parishes or in the urban orphanages, hospitals, and reformatories for fallen women of the ancien regime. Vacher's methodology, comparing the congregation's theoretical, prescriptive documents with evidence about the actual life of these communities in southern France, leads to the question of whether and to what degree succeeding generations grasped the original inspiration. Sisters of St. Joseph preceding the French Revolution established a paradigm for the active, apostolic women's congregations of the nineteenth and twentieth centuries that supplied the workforce behind Catholic schools, colleges, hospitals, and orphanages in the United States, Canada, and elsewhere. In researching them, Nuns Without Cloister addresses a little understood but central dimension in the early modern foundations of contemporary Catholicism.

A beautifully smooth and professional translation of a compelling and indispensable landmark text in the history of social provision in France. It is the story of how in the mid-seventeenth century six largely uneducated village women of modest means were brought together by a concerned Jesuit to form an association recognized and promoted by the local bishop and directed to village services such as recycling clothing and blankets, feeding and sheltering orphans or children whose parents were disabled, and teaching survival skills like lace making. It was to be the acorn that produced the oak, the genesis of a significant worldwide movement, the Sisters of St. Joseph. -- Olwen Hufton, Merton College, Oxford
Byrne's translation provides us with Vacher's technical research and analyses, yet maintains a clear and concise narrative. Nuns Without Cloister includes extensive use of footnotes; at the end are supporting documents, charts, glossary, index and bibliography. Nuns Without Cloister will be of interest to graduate students and researchers interested in history of women's congregations, women's spirituality and history as well as Catholic studies. * Magistra *

Marguerite (Sister Therese) Vacher, CSJ has been involved in research, teaching, and writing on the origins of the Sisters of St. Joseph since 1965 and holds the Doctorat d'Histoire moderne from the Universite Lumiere Lyon 2. Her publications include the critical edition of S urs de Saint-Joseph: Textes primitives (1981) and Des "regulieres" dans le siecle: Les s ursde Saint-Joseph du P. Medaille aux XVIIe et XVIIIe siecles (1991). She resides in Clermont-Ferrand.

GOR010106409
Nuns Without Cloister: Sisters of St. Joseph in the Seventeenth and Eighteenth Centuries by Marguerite Vacher
Marguerite Vacher
Used - Very Good
Paperback
University Press of America
2010-04-12
460
0761843426
9780761843429
N/A
Book picture is for illustrative purposes only, actual binding, cover or edition may vary.
This is a used book - there is no escaping the fact it has been read by someone else and it will show signs of wear and previous use. Overall we expect it to be in very good condition, but if you are not entirely satisfied please get in touch with us.