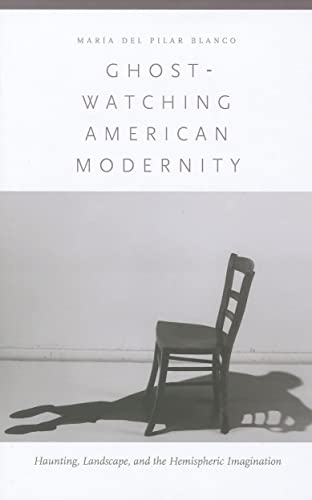 In Stock
$19.49
+10% GST
Ghost-watching American Modernity explores the intersections of haunting and space in nineteenth- and twentieth-century works from Spanish America and the US. In an intervention that will reconfigure the critical uses of haunting for scholars across different fields, Blanco advances ghost-watching as a method for rediscovering haunting on its own terms.
Very Good
Only 1 left

In Ghost-Watching American Modernity, Maria del Pilar Blanco revisits nineteenth- and twentieth-century texts from Spanish America and the United States to ask how different landscapes are represented as haunted sites. Moving from foundational fictions to Westerns, Blanco explores the diverse ways in which ghosts and haunting emerge across the American hemisphere for authors who are preoccupied with evoking the experience of geographical transformations during a period of unprecedented development.

The book offers an innovative approach that seeks to understand ghosts in their local specificity, rather than as products of generic conventions or as allegories of hidden desires. Its chapters pursue formally attentive readings of texts by Domingo Sarmiento, Henry James, Jose Marti, W. E. B. Du Bois, Juan Rulfo, Felisberto Hernandez, and Clint Eastwood. In an intervention that will reconfigure the critical uses of spectrality for scholars in U.S./Latin American Studies, narrative theory, and comparative literature, Blanco advances ghost-watching as a method for rediscovering haunting on its own terms.

Ghost-Watching American Modernity is about upsetting things. Not least, it is about upsetting critical orthodoxies. Disentangling ghosts from theoretical, generic, and national binds, the book invites us to see afresh how ubiquitously, and in how many ways, American modernity is haunted. Blanco advances a bold claim here, situating haunting as crucial to modernity, and she roams hemispherically, drawing together unexpected bedfellows from up and down the Americas. And yet, as she compellingly grounds her interpretive arabesques in specific locations (physical and textual), she never loses sight of the unique, situated ways each haunting works. The result is a work of inspired eclecticism-rich, ranging, and full of surprises. -- -Judith Richardson * Stanford University *
Clearly innovative and well researched, Blanco's study is a brave attempt to demystify the texts and authors put together by her inspired eclecticism. * -CHOICE *
Classic and popular literature by Henry James and others lends a scholarly and detailed set of insights to this consideration of place and the evolution of haunting legends, making this a powerful, recommended pick for a range of libraries, from new age to literary and historical holdings alike. * -Midwest Book Review *
Blanco's unique textual comparisons and intriguing analyses make 'Ghost-Watching American Modernity' a valuable contribution to the conversation on haunting. -- Jacquelynn Kleist * -Journal of the Fantastic in the Arts *
"This is a smart, well-researched, and comprehensive critique of the benefits of 'ghost talk' or 'ghost watching' in the American grain." -- -Peter Hitchcock * CUNY Graduate Center *

Maria del Pilar Blanco is Lecturer in Latin American Literature and Culture at University College London. She is the co-editor, with Esther Peeren, of Popular Ghosts: The Haunted Spaces of Everyday Culture.

GOR010096761
Ghost-Watching American Modernity: Haunting, Landscape, and the Hemispheric Imagination by Maria Del Pilar Blanco
Maria Del Pilar Blanco
Used - Very Good
Hardback
Fordham University Press
2012-02-15
234
0823242145
9780823242146
N/A
Book picture is for illustrative purposes only, actual binding, cover or edition may vary.
This is a used book - there is no escaping the fact it has been read by someone else and it will show signs of wear and previous use. Overall we expect it to be in very good condition, but if you are not entirely satisfied please get in touch with us.