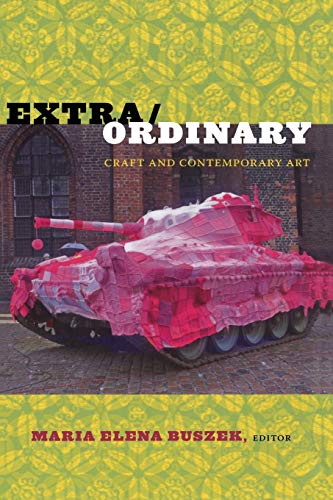 Contemporary artists such as Ghada Amer and Clare Twomey have gained international reputations for work that transforms ordinary craft media and processes into extraordinary conceptual art, from Amer's monumental stitched paintings to Twomey's large, ceramics-based installations. Despite the amount of attention that curators and gallery owners have paid to these and many other conceptual artists who incorporate craft into their work, few art critics or scholars have explored the historical or conceptual significance of craft in contemporary art. Extra/Ordinary takes up that task. Reflecting on what craft has come to mean in recent decades, artists, critics, curators, and scholars develop theories of craft in relation to art, chronicle how fine-art institutions understand and exhibit craft media, and offer accounts of activist crafting, or craftivism. Some contributors describe generational and institutional changes under way, while others signal new directions for scholarship, considering craft in relation to queer theory, masculinity, and science. Encompassing quilts, ceramics, letterpress books, wallpaper, and textiles, and moving from well-known museums to home workshops and political protests, Extra/Ordinary is an eclectic introduction to the "craft culture" referenced and celebrated by artists promoting new ways of thinking about the role of craft in contemporary art.

"Extra/Ordinary is not only the best anthology of recent writing on craft out there, it also delivers several assessments of the Do-It-Yourself movement, which is sorely in need of critical interpretation."-Glenn Adamson, Victoria and Albert Museum
"Maria Elena Buszek has compiled an anthology that matches the dynamism of a field in flux. As a museum curator responsible for developing exhibitions that examine contemporary craft, I actively seek tools that provide context for craft from within, across, and outside this arena's historic borders. The essays compiled here provide access to diverse voices and approaches, filling a current void in scholarship and engaging craft from a range of perspectives and places in a shifting culturescape. Buszek's anthology moves across discursive platforms to share fresh ways of thinking about craft in relationship to gender, domesticity, feminism, activism, and science. Here, ordinary craft is the focus of productive criticism rather than denied, broadening the frameworks for how we connect craft to meaning today."-Namita Gupta Wiggers, Museum of Contemporary Craft
"Maria Elena Buszek's volume critically unravels assumptions about craft and pieces together new theories about contemporary handmaking that are at once vibrant, textured, and necessarily scrappy."-Julia Bryan-Wilson, University of California, Irvine
"[A] smart, sassy collection of essays . . . bound to be a new classic for both academics and craft artists." -- Antonia Blair * Bust *
"Finally, a reason to put down the knitting needles. . . . Like a quiltmaker, Buszek has assembled a fine array of writers and topics. . . ." -- Anastasia Masurat * Bitch *
"[A] timely response to contemporary art's interest in craft, challenging the perception that artists choose media or their work with the mere wanton abandon of a child in front of a pick'n'mix counter. Instead, its various authors explore the complexity of art's interaction with craft, making subtle note of those covering this terrain before." -- Stephen Knott * Crafts *
"Extra/Ordinary begins to establish, with refreshing honesty, this thing that has become Craftivism. Time will tell if it sticks." -- Jessica Hemmings * Surface Design Journal *
"[A] stellar collection of interdisciplinary essayists. . . . [T]his collection features full color illustrations, figures and photographs which not only clarify the processes and products referenced in the accompanying articles but also makes the book a joy to read, enhancing as it does the visual performance of the text itself. The inclusion of the full-color documentation of artistic process as well as the art objects produced therefore honors the main premise of the text: that craft can and should be understood as a liminal form of culturally performative fine art." -- Kristen Williams * Liminalities *
"This volume fills a void in the scholarship that examines the meaning and the diverse roles that craft plays in the discourse surrounding contemporary art and social, political and popular culture bringing together the voices of artists, curators, cultural thinkers and scholars. Together these authors have opened the dialogue allowing craft to have its own voice and its own meaning, no longer defined by or against fine art." -- Angela Brayham * Visual Studies *

Maria Elena Buszek is a critic, curator, and Associate Professor of Art History at the University of Colorado, Denver. She is the author of the book Pin-Up Grrrls: Feminism, Sexuality, Popular Culture, also published by Duke University Press. She has written for magazines and journals including BUST, Art in America, Photography Quarterly, and TDR: The Journal of Performance Studies.

GOR011102271
Extra/Ordinary: Craft and Contemporary Art by Maria Elena Buszek
Maria Elena Buszek
Used - Like New
Paperback
Duke University Press
2011-03-04
320
0822347628
9780822347620
N/A
Book picture is for illustrative purposes only, actual binding, cover or edition may vary.
The book has been read, but looks new. The book cover has no visible wear, and the dust jacket is included if applicable. No missing or damaged pages, no tears, possible very minimal creasing, no underlining or highlighting of text, and no writing in the margins.