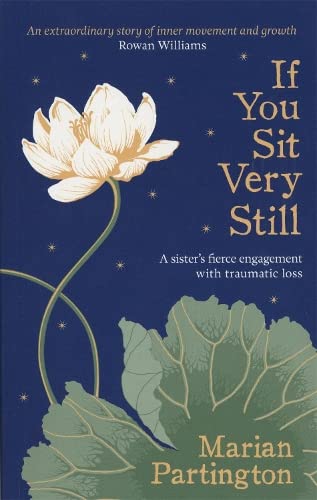 If You Sit Very Still
by Marian Partington

Used Price
$22.49
inc. GST
Free Shipping in Australia
When the news broke that her missing sister Lucy had been murdered, Marian Partington had one of two choices to make. She could let the grief and rage she felt overwhelm her, or she could try to turn her trauma into something good. This moving memoir details Marian's fierce engagement with her loss and refusal to become its victim.
Like New Very Good Good

If You Sit Very Still Summary

If You Sit Very Still by Marian Partington

In 1994, 21 years after her disappearance, Lucy Partington's remains were discovered in Fred and Rosemary West's basement at 25 Cromwell Street, Gloucester. In this powerful and lyrical book, Lucy's elder sister, Marian, reclaims Lucy from the status of victim and finds an authentic and compassionate response to her traumatic loss. Her inspiring narrative of healing draws on Buddhist and Quaker practices and culminates in restorative justice work in prisons.

If You Sit Very Still Reviews

There is not a sentence in this book that has not been felt, fought for and hard won. -- Craig Brown, Book of the Week, Mail on Sunday
We are spared no aspect of the anguish, confusion and anger experienced, but are also told an extraordinary story of inner movement and growth - growth in a faith much less orthodox on the face of it than Lucy's ardent Catholicism but equally deep and serious. It is a book about the massive difficulty of anything like reconciliation in the wake of outrage. There is nothing easily consoling here, but rather a sense of stillness, acceptance and hope - both given and worked for. -- Rowan Williams, Book of the Year 2012, Times Literary Supplement
This is not a story of 'coping with loss', nor of 'overcoming emotion', nor less of 'achieving forgiveness'. It is the story of simply, doggedly and patiently refusing to accept the path of victimhood, revenge or bitter resentment. Instead Marian has walked the way of uncertainty, humility and hope which, through spiritual struggle and human kindness, accepts and transforms sadness, loss and evil. -- Stephen Cherry, author of Healing Agony: Re-Imagining Forgiveness

Marian Partington was born in Oxford in 1948. She has been working with The Forgiveness Project as a storyteller and facilitator since 2005. Marian lives with her husband in Montgomeryshire, Wales.

GOR008197975
If You Sit Very Still by Marian Partington
Marian Partington
Used - Like New
Hardback
Jessica Kingsley Publishers
2012-05-10
208
1908363029
9781908363022
N/A
Book picture is for illustrative purposes only, actual binding, cover or edition may vary.
The book has been read, but looks new. The book cover has no visible wear, and the dust jacket is included if applicable. No missing or damaged pages, no tears, possible very minimal creasing, no underlining or highlighting of text, and no writing in the margins.