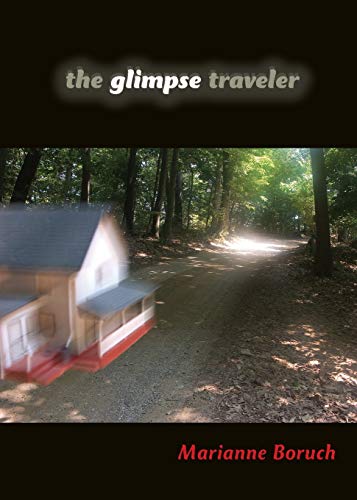 The Glimpse Traveler by Marianne Boruch

The Glimpse Traveler by Marianne Boruch

When she joins a pair of hitchhikers on a trip to California, a young Midwestern woman embarks on a journey about memory and knowledge, beauty and realization. This true story, set in 1971, recounts a fateful, nine-day trip into the American counterculture that begins on a whim and quickly becomes a mission to unravel a tragic mystery. The narrator's path leads her to Berkeley, San Francisco, Mill Valley, Big Sur, and finally to an abandoned resort motel, now become a down-on-its-luck commune in the desert of southern Colorado. Neither a memoir about private misery, nor a shocking expose of life in a turbulent era, The Glimpse Traveler describes with wry humor and deep feeling what it was like to witness a peculiar and impossibly rich time.

[T]his book ha[s] a distinctive writing style. Boruch is a poet and English professor, so she has a beautiful way with words.

What Marianne Boruch has done in this memoir is nothing short of extraordinary: nearly 40 years after the fact, she has managed to recreate a road trip-and a time period-so wholly that I felt like I was there.

Most exceptional is Marianne Boruch's The Glimpse Traveler, published by Indiana University Press. . . . There are so many goodies in this book. Boruch lingers in the most intriguing moments of their absurdly haphazard journey across the country with an awareness of the cliches of the time. . . . The book clips along at an addictive pace and in what seems like no time at all reaches its staggering climax and then concludes with an equally stunning finale.

With a frank poignancy which paints the experience as neither good or bad but merely a truly unique experience like none other, The Glimpse Traveler is a thoughtful and much recommended pick.

The Glimpse Traveler is more than a book written about a generation; this is a book about memory and how we recall the intense moments of our lives. Most writers would reveal the story in long chapters, steeped with descriptions and dialogue, but Boruch offers us something different: the way memories are really revealed.

The Glimpse Traveler sets the past glimmering with fragments of remembered light.

This slender volume by poet and essayist Boruch . . . will transport readers to a time when a nation's youth searched for meaning against the backdrop of the Vietnam War.

The journey of this memoir is not only one from this side of the country to the other, a mere matter of mileage, but from this point in time to a point somewhere in memory, a distance measured in decades, that blurs and disappears as soon as it arrives. 'Oh moment of history,' exclaims Boruch's narrator, invoking memory's ancient muse, 'be specific and huge,' a summons to which The Glimpse Traveler answers in full.

Marianne Boruch, a poet, is Professor of English at Purdue University. She has published several poetry collections and two books of essays, and her work has appeared in the New Yorker, the Nation, and elsewhere. She has won two Pushcart Prizes, the Parnassus Terrence DePres Award, and fellowships from the National Endowment for the Arts and the Guggenheim Foundation.

NLS9780253223449
9780253223449
025322344X
The Glimpse Traveler by Marianne Boruch
Marianne Boruch
Break Away Books
New
Paperback
Indiana University Press
2011-08-19
240
N/A
Book picture is for illustrative purposes only, actual binding, cover or edition may vary.
This is a new book - be the first to read this copy. With untouched pages and a perfect binding, your brand new copy is ready to be opened for the first time
Trustpilot