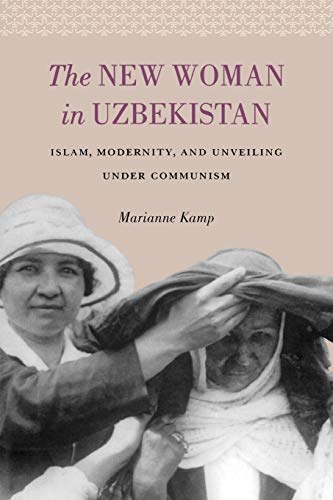 The New Woman in Uzbekistan
by Marianne Kamp

In Stock
$21.99
+10% GST
Explores the lives of Uzbek women, in their own voices and words, before and after the Russian Revolution of 1917. Drawing upon oral histories and writings, this book re-examines the Soviet Hujum, the 1927 campaign in Soviet Central Asia to encourage mass unveiling as a path to social and intellectual "liberation."
Good
Only 1 left

The New Woman in Uzbekistan Summary

The New Woman in Uzbekistan: Islam, Modernity, and Unveiling under Communism by Marianne Kamp

Winner of the Association of Women in Slavic Studies Heldt Prize

Honorable mention for the W. Bruce Lincoln Prize Book Prize from the American Association for the Advancement of Slavic Studies (AAASS)

This groundbreaking work in women's history explores the lives of Uzbek women, in their own voices and words, before and after the Russian Revolution of 1917. Drawing upon their oral histories and writings, Marianne Kamp reexamines the Soviet Hujum, the 1927 campaign in Soviet Central Asia to encourage mass unveiling as a path to social and intellectual "liberation." This engaging examination of changing Uzbek ideas about women in the early twentieth century reveals the complexities of a volatile time: why some Uzbek women chose to unveil, why many were forcibly unveiled, why a campaign for unveiling triggered massive violence against women, and how the national memory of this pivotal event remains contested today.

The New Woman in Uzbekistan Reviews

Marianne Kamp has written a real tour de force in The New Woman in Uzbekistan. [This] is an important book both for specialists and general readers. Kamp has courageously dived into some of the most controversial and moving stories of Central Asian women's lives. The result is a rich, multifaceted book that makes for fascinating reading.

Kamp's book is a remarkable study of societal changes triggered by Russian and Soviet rule in Central Asia. The focus on women's subjectivity and her admirable use of oral interviews against a backdrop of solid historical research expose the untapped potential of oral history: we get fascinating insights into Uzbek society during the first two decades of Soviet rule.

The book's target audience is likely to be scholars, but speaking from experience, advanced undergraduates will find the ideas interesting and the writing accessible. This work will reward anyone who is interested in ideas about self-construction and gendered representations in the public sphere.

This prize-winning and passionate book deserves a place on the bookshelf of any serious historian of Central Asia or specialist in Islamic women's studies. It is an inventive attempt to recover women's voices and explore the complexities of female agency; it breaks new ground in exploring Central Asian women's subjectivity . . . .This study sets a standard for feminist analysis of Central Asia; courses in women's studies, gender theory, and Islamic, Soviet, or oral history should consider assigning this accessible, well-written volume.

Kamp's work makes compelling reading and offers important insights not only for specialists on Central Asia but also for those studying the expansion of Soviet power to the periphery. . . . Her engagement of other important works on the region is sure to spark a lively debate over the motors and nature of social change.

An irreplaceable contribution to scholarly understanding of Central Asian culture and history.

Marianne Kamp's study of Uzbek women's experiences of the late twentieth century..is an extremely welcome addition to the literature on women in Central Asia..a very accessible book that will appeal to wide readership, from historians to women's studies scholars and students alike.

This book makes numerous original contributions, particularly in its collection of Uzbek women's life stories, which are used to highlight women's subjectivity and rational decisions about when and if to resist their subordination to men.

This is a fine scholarly study on veiling. . . the book is certainly a useful addition to the literature covering the pro and cons of veiling. Moreover, it is relevant and timely.

A very important contribution to our understanding of women emancipation policy from the late Tsarist period to WWII, and more widely to the history of Sovietization in the 1930s.

Marianne Kamp is assistant professor of history at the University of Wyoming in Laramie.

Acknowledgments
A Note on Transliteration and Abbreviations
Introduction
1. Russian Colonialism in Turkestan and Bukhara
2. Jadids and the Reform of Women
3. The Revolution and Rights for Uzbek Women
4. The Otin and the Soviet School
5. New Women
6. Unveiling before the Hujum
7. The Hujum
8. The Counter-Hujum: Terror and Veiling
9. Continuity and Change in Uzbek Women's Lives
10. Conclusions
Notes
Glossary
Bibliography
Index

GOR010109616
The New Woman in Uzbekistan: Islam, Modernity, and Unveiling under Communism by Marianne Kamp
Marianne Kamp
Used - Good
Paperback
University of Washington Press
2008-01-31
320
0295988193
9780295988191
N/A
Book picture is for illustrative purposes only, actual binding, cover or edition may vary.
This is a used book - there is no escaping the fact it has been read by someone else and it will show signs of wear and previous use. Overall we expect it to be in very good condition, but if you are not entirely satisfied please get in touch with us.