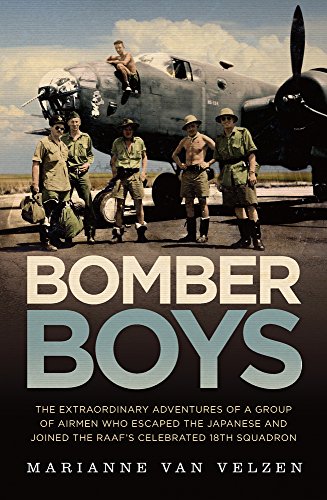 Used Price
$36.99
inc. GST
Free Shipping in Australia
The unknown story of a unique RAAF squadron, its men and its mission to halt the Japanese advance in the Pacific
Reviews:
Trustpilot
Very Good Well Read

Bomber Boys: The Hair-raising Adventures of a Group of Airmen Who Escaped the Japanese and Became the RAAF's Celebrated 18th Squadron by Marianne Van Velzen

March 1942. Singapore is about to fall. In Java, a Dutch civilian pilot and an Australian military dispatch rider embark on a frightening escape from the advancing Japanese that takes them from Bandung to a crash landing just north of Darwin. Both would join a unique band of flyers determined to strike back at the enemy.

This is the extraordinary and little known story of more than 100 Dutch airmen stranded in Australia with no country to return to who were joined by a contingent of Australians to make up the RAAF's No. 18 (Netherlands East Indies Squadron). Formed in Canberra in April 1942, the squadron flew operational coastal patrols before eventually being relocated to the secret MacDonald Airfield, north of Pine Creek in the Northern Territory and then Batchelor near Darwin.

Told fully for the first time, this is, however, more than a story about the 900 bombing raids, reconnaissance missions and attacks on Japanese shipping that the squadron flew in its three years of existence under Australian control. At its heart, is a powerful and compelling story of a group of very different men thrown together for a common purpose and the strange and sometimes difficult friendships they formed.

Marianne van Velzen was born in the Netherlands in 1953 and emigrated to Australia in the mid-1950s. She has worked as a journalist and an editor, in radio and TV. Marianne is also the author of Call of the Outback (2016).

Author's note Map of 18th and 120th Squadron: Bases and Flight Movements 1. Java, 1942 2. The dispatch rider 3. Attack on Broome 4. Escape to Australia 5. Stapleton Station, NT 6. The bombing of Darwin 7. Archerfield Air Base, Brisbane 8. Flying under the bridge 9. Fairbairn Airfield, Canberra 10. The making of three traitors 11. Nothing is fair in love and war 12. Picking up the pieces 13. The move north 14. MacDonald Airfield, NT 15. First operational order 16. Across the Timor Sea 17. Batchelor, NT 18. War and horseracing 19. New recruits 20. Death of a friend 21. Moving on 22. The hell of Merauke 23. Island hopping 24. Return to Java 25. Lost and found 26. Message from a Don R Epilogue Bibliography Acknowledgements

GOR010758454
Bomber Boys: The Hair-raising Adventures of a Group of Airmen Who Escaped the Japanese and Became the RAAF's Celebrated 18th Squadron by Marianne Van Velzen
Marianne Van Velzen
Used - Very Good
Paperback
Allen & Unwin
2017-04-26
312
1760296473
9781760296476
N/A
Book picture is for illustrative purposes only, actual binding, cover or edition may vary.
This is a used book - there is no escaping the fact it has been read by someone else and it will show signs of wear and previous use. Overall we expect it to be in very good condition, but if you are not entirely satisfied please get in touch with us.