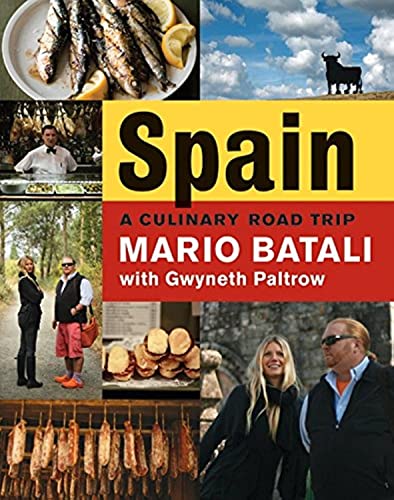 From Mario Batali, superstar chef and author of Molto Italiano and Italian Grill, comes an eating tour throughout Spain with his friend Gwyneth Paltrow.

From Mario Batali, superstar chef and author of Molto Italiano and Italian Grill, comes an eating tour throughout Spain with his friend Gwyneth Paltrow.

Spain...A Culinary Road Trip is the companion book to the prime-time public television series Spain...On The Road Again. The premise is simple: Mario Batali and Mark Bittman are single-minded, food-obsessed friends who are constantly on the lookout for the food, wine, and cooking that is unique to Spain-and in this series they will find it. Gwyneth Paltrow and the Spanish actress Claudia Bassols are eager to enjoy all the pleasures the country has to offer, and each pair will be lured into the worlds of the other.

The foursome take the ultimate road trip adventure, showcasing the pleasures of Spain, the country's regional cuisine, art, history, and culture, as they've never been seen before. Hundreds of gorgeous and candid photos, anecdotes, and more than seventy recipes from Mario appear in this scrapbook of the dream vacation through Spain.

Mario Batali is the James Beard Award-winning author of eight cookbooks, including Molto Batali, Molto Gusto, Molto Italiano, and Spain...A Culinary Road Trip, as well as the app Mario Batali Cooks! With a host of television shows to his name; fifteen restaurants; and Eataly, a fifty-thouasand-square-foot Italian marketplace in New York City's Flatiron District that he co-owns with his partner, Joe Bastianich, Mario Batali is one of the most recognized and most respected chefs working in America today. Mario splits his time between New York City's Greenwich Village and northern Michigan with his wife and their two sons. Gwyneth Paltrow is an Academy Award-winning actress. She lives in New York City and London.

GOR002686256
Spain...A Culinary Road Trip by Mario Batali
Mario Batali
Used - Very Good
Hardback
HarperCollins Publishers Inc
2008-11-01
384
0061560936
9780061560934
N/A
Book picture is for illustrative purposes only, actual binding, cover or edition may vary.
This is a used book - there is no escaping the fact it has been read by someone else and it will show signs of wear and previous use. Overall we expect it to be in very good condition, but if you are not entirely satisfied please get in touch with us.