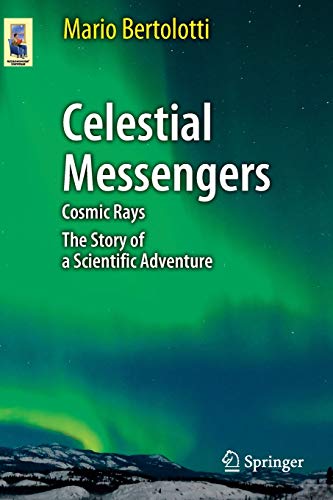 The book describes from a historical point of view how cosmic rays were discovered. The main focus is on how the knowledge was gained, describing the main experiments and the conclusions drawn. Cosmic rays have an official date of discovery which is linked to the famous balloon flights of the Austrian physicist Hess in 1912.

Celestial Messengers: Cosmic Rays: The Story of a Scientific Adventure by Mario Bertolotti

The book describes from a historical point of view how cosmic rays were discovered. The book describes the research in cosmic rays. The main focus is on how the knowledge was gained, describing the main experiments and the conclusions drawn. Biographical sketches of main researchers are provided. Cosmic rays have an official date of discovery which is linked to the famous balloon flights of the Austrian physicist Hess in 1912. The year 2012 can therefore be considered the centenary of the discovery.

Mario Bertolotti received his degree in Physics from the University of Roma, Italy and became full professor of physics at the Engineering Faculty of the University of Roma "La Sapienza" from 1970 until 2008, when he retired.
After a short period at CERN, Ginevra he returned to Italy and started research on lasers, light-matter interactions, nonlinear optics, etc. He is the author of about 500 papers on peer reviewed physics journals. He is fellow of IOP, American Optical Society, Italian Physical Society, Italian Optical and Photonic Society of which he has been the president, European Optical Society in which he held and is holding several positions. He is member of European Physical Society, where he held positions several years ago. Mario Bertolotti has been member of scientific committee in several journals. He was editor of the journal Pure and Applied Optics edited by IOP, he is editor of the Journal of the European Optical Society: Rapid Publications (JEOS:RP), an electronic journal. He has been director of several summer schools in Erice, and other places.
He was also interested in the hystoric developments of physics and wrote two books on the history of lasers.
Cosmic rays were a subject of his interest altough he never worked actively in the field.

Prehistory - The electron, the proton and X-rays.- Prehistory - Radioactivity.- Cosmic rays - The antefacts.- The discovery - Victor F. Hess and the balloon flights.- The confirmation - Robert Millikan and the "birth cry" of the borning atoms.- A turning point - Things are not as they look.- The earth magnetic field and the geomagnetic effects.- The positive electron.- The electromagnetic showers.- The muon.- The discovery of the -meson, nuclear emulsions and the first "strange" particles.- The extended showers.- Nuclear stars.- The neutrino: elusive and capricious particles able to come from very far away.- What are the primary cosmic rays?.- The origin of cosmic rays.- X- and gamma rays from space.
NLS9783642283703
9783642283703
3642283705
Celestial Messengers: Cosmic Rays: The Story of a Scientific Adventure by Mario Bertolotti
Mario Bertolotti
Astronomers' Universe
New
Paperback
Springer-Verlag Berlin and Heidelberg GmbH & Co. KG
2012-10-14
330
N/A
Book picture is for illustrative purposes only, actual binding, cover or edition may vary.
This is a new book - be the first to read this copy. With untouched pages and a perfect binding, your brand new copy is ready to be opened for the first time
Trustpilot