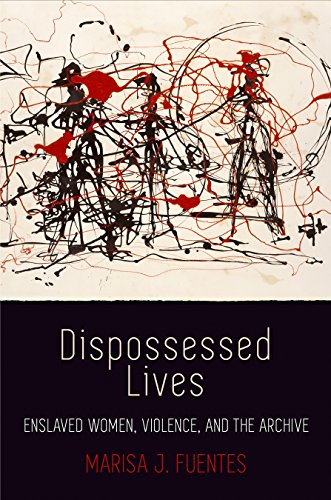 Vividly recounting the lives of enslaved women in eighteenth-century Bridgetown, Barbados, and their conditions of confinement through urban, legal, sexual, and representational power wielded by slave owners, authorities, and the archive, Marisa J. Fuentes challenges how histories of vulnerable and invisible subjects are written.

In the eighteenth century, Bridgetown, Barbados, was heavily populated by both enslaved and free women. Marisa J. Fuentes creates a portrait of urban Caribbean slavery in this colonial town from the perspective of these women whose stories appear only briefly in historical records. Fuentes takes us through the streets of Bridgetown with an enslaved runaway; inside a brothel run by a freed woman of color; in the midst of a white urban household in sexual chaos; to the gallows where enslaved people were executed; and within violent scenes of enslaved women's punishments. In the process, Fuentes interrogates the archive and its historical production to expose the ongoing effects of white colonial power that constrain what can be known about these women.

Combining fragmentary sources with interdisciplinary methodologies that include black feminist theory and critical studies of history and slavery, Dispossessed Lives demonstrates how the construction of the archive marked enslaved women's bodies, in life and in death. By vividly recounting enslaved life through the experiences of individual women and illuminating their conditions of confinement through the legal, sexual, and representational power wielded by slave owners, colonial authorities, and the archive, Fuentes challenges the way we write histories of vulnerable and often invisible subjects.

"Dispossessed Lives exemplifies the best new historical scholarship on slavery and gender. Marisa Fuentes's compelling study of women's lives in and around Bridgetown leaves the reader with a clear sense of who these women were and how they navigated the terrain of a Caribbean slave society. At the same time, Fuentes's engagement with the problems of the archive testifies to the powerful entanglements that constitute the afterlife of slavery. This is an important study that fundamentally reshapes the questions we are compelled to ask about the histories of slavery in the Atlantic world."-Jennifer L. Morgan, New York University

"Original in both content and structure, Dispossessed Lives offers a nuanced interpretation of race, gender, sexuality, and the power of the archive in the eighteenth-century urban British Atlantic. Marisa J. Fuentes is masterful with her use of extremely scarce primary source material, forcing us to rethink methodology and teaching us how to understand what is not present in the archives."-Erica Armstrong Dunbar, University of Delaware

"Dispossessed Lives reflects the tremendous complexity embedded in projects that attempt to extricate the histories of enslaved women from an archive seemingly bent on their erasure. Through artful discussions of the bondwomen who comprise her chapters, reading into silence as well as sound, Fuentes encourages historians to assess the limits of enslaved agency, highlighting the real, violent strictures that shaped the lives and afterlives of enslaved women residing in eighteenth-century Bridgetown. In doing so, Fuentes demonstrates what is possible when we approach familiar evidence with fresh eyes and innovative strategies."Journal of African American History

"Dispossessed Lives is an impassioned and meticulously researched call to rethink how history, as a discipline, can approach the absence of archival evidence concerning enslaved women's lives in the Americas . . . [Fuentes] makes a compelling argument about the practice of history as a discipline itself, in
addition to mapping new archival territory."-Textual Cultures

"[A]n astonishing and discipline-changing piece of scholarship. Interested in black feminist theory, gender, sexuality, slavery, and the urban Caribbean, [Fuentes'] interdisciplinary deep dive into the archives collides with so-called conventional understandings of historical methodology, historiography, knowledge production, and especially historical archival research . . . scholars can no longer rationalize the absence of marginalized figures like the women in this book because the archival documents do not explicitly reveal
them. Moreover, one will be hard pressed to tread heavily ever again over those documents - or their already fragment-rendered subjects - after reading this incredibly important work."-Journal of Early American History

"Dispossessed Lives is an important and complex work that demonstrates how historians can employ a range of interdisciplinary methodologies in order to tease out, in sensitive and thoughtful ways, the hidden corporeality of enslavement, or, put another way, the lives, deaths, and bodies of enslaved women that are buried in the archive."-Melanie J. Newton, University of Toronto

GOR011102368
Dispossessed Lives: Enslaved Women, Violence, and the Archive by Marisa J. Fuentes
Marisa J. Fuentes
Early American Studies
Used - Like New
Paperback
University of Pennsylvania Press
2018-03-12
232
0812224183
9780812224184
Winner of Winner of the 2016 Caribbean Studies Association Barbara Christian Prize. Winner of Winner of the 2016 Berkshire Conference of Women Historians Book Prize. Winner of Winner of the 2017 Association of Black Women Historians Letitia Woods Brown Memorial Book Award.
Book picture is for illustrative purposes only, actual binding, cover or edition may vary.
The book has been read, but looks new. The book cover has no visible wear, and the dust jacket is included if applicable. No missing or damaged pages, no tears, possible very minimal creasing, no underlining or highlighting of text, and no writing in the margins.