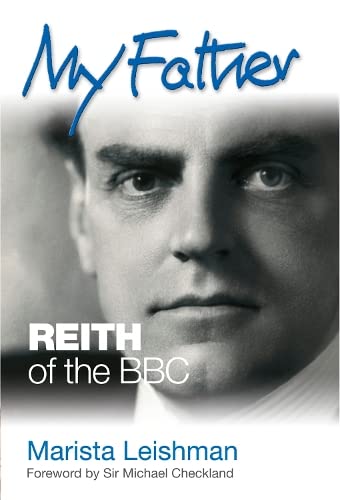 My Father
by Marista Leishman

Used Price
$25.49
inc. GST
Free Shipping in Australia
Explosive story of life with the volcanic father of our media age, John Reith, founder of the BBC. Shortlisted for the Saltire Award as Best Book of the Year, this is the story of the human cost of greatness.
Reviews:
Trustpilot
Very Good

My Father by Marista Leishman

Drama was at the heart of the volcanic life of Lord Reith. Through the eyes of his daughter, we see, for the first time, into the perosnal story of a man who made a legendary contribution to British cuture. Towering 6'6" tall, Reith was an easy target for a sniper during the first World War. The scar on his cheel, from the wound that almost killed him, heightened his commanding appearance. His immense gifts of oratory and organisation - and his great reserves of energy - stamped their makr o the fledgling BBC. From an office little bigger than a broom cupboard, an institution was formed whose standards to this day have the respect of the world. Reith's compelling story also includes a perilous wartime journey with his yong family across the Atlantic, a stormy relationship with Churchill, the abdication of a king an dmuch more besides. Larger than life, he was a man of excessive contradictions, with the heights of outrageous success matched by hitter, black despair. Personal qualities that marked him out as exceptional on the world stage were just as intense in their private infliction of damage on himself and his family.

`...a sensational book' -- Andrew Marr
`...it was a surprise and a delight, one of the best family memoirs I have read - honest, funny, sharp, well-written but never bitter - although a person other than Marista would have had plenty to be bitter about.' -- Elizabeth Grice * Daily Telegraph *
`Great men have feet of clay. The contradictions of Reith's life do not diminish his contribution to the world, but force us to recognise that there is always a cost to great achievement. This is a revealing read about a real person, not the fantasy saint he has sometimes been painted to be.' -- Rt Rev. Nick Baines
'Enthralling and enlightening. 10/10.' * The Second World War Magazine *
'Reith's long shadow sometimes seems impenetrable. This casts some welcome new light on him.' -- James Naughtie
'One of the most fascinating books I've read in a very long time . . . Reith emerges as one of the omost extraordinary figures of hte twentieth century: the dark varnish covering the poular portrait of a patriarchal, dour and humourless Reith has been removed to reveal the twinke and style of a much more interesting and important man.' -- Stephen Fry
Reithian values, after so many years at the BBC, run through me like a stick of Blackpool rock, Matista Leishman's biography is a fascinating insight into the character and personality of the first Director General and the mad, early days of the corporation. She manages to inform, educated and entertain. Like father, like daughter, I guess!' -- Jenni Murray, BBC Radio 4
John Reith is a legend, a man admired almost everywhere for creating the BBC, a unique organisation which had had a profound incluence right across the world... Is this the time to debunk the Reithian legend? Read the book and make up your own mind.' -- Greg Dyke
T'he public achievement of the father is set against a background of profound human frailty at home . . . John Reith remains on e of the commanding figures of the twentieth century and the creator of one of its greatest institutions.' -- Sir Michael Checkland

Marista Leishman grew up in the dramatic and awkward household of Sir John Reith. She attended a rigorous boarding school and then St Andrews University. After graduating with a degree in English and Philosophy, she spent time fundraising.

GOR001281549
My Father by Marista Leishman
Marista Leishman
Used - Very Good
Hardback
Saint Andrew Press
2006-09-26
336
0715208349
9780715208342
N/A
Book picture is for illustrative purposes only, actual binding, cover or edition may vary.
This is a used book - there is no escaping the fact it has been read by someone else and it will show signs of wear and previous use. Overall we expect it to be in very good condition, but if you are not entirely satisfied please get in touch with us.