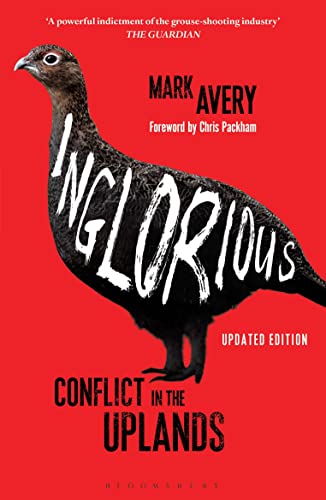 Inglorious: Conflict in the Uplands by Mark Avery

Driven grouse shooting, where flocks of Red Grouse are chased by lines of beaters so that they fly over lines of 'guns' that shoot the fast-flying birds, is a peculiarly British fieldsport. It is also peculiarly British in that it is deeply rooted in the British class system. This multi-million pound business dominates the hills of the north of England - the Pennines, the North Yorkshire Moors, the Cheviots - and throughout Scotland. Grouse shooting is big business. VERY big business And backed by powerful, wealthy lobbying groups, its tendrils run throughout British society. Inglorious makes the case for banning driven grouse shooting. The facts and arguments are presented fairly but the author, Mark Avery, states from the start why he has, after many years of soul-searching, come down in favour of an outright ban. There is too much illegal killing of wildlife, such as Buzzards, Golden Eagles, and, most egregiously of all, Hen Harriers; and, as a land use, it wrecks the ecology of the hills. However, grouse shooting is economically important, and it is a great British tradition. All of these, and other points of view, are given fair and detailed treatment and analysis - and the author talks to a range of people on different sides of the debate. The book also sets out Avery's campaign with Chris Packham to gain support for the proposal to ban grouse shooting, culminating in 'Hen Harrier Day', timed to coincide with the 'Glorious' 12th. This new paperback edition includes new material on what went on in 2015, including the devastating floods of that winter, bringing the story right up to date. Mark Avery continues to stir up a debate about fieldsports, the countryside and big business in a book that all British conservationists will want to read.

A powerful indictment of the grouse-shooting industry and its illegal shooting and propaganda war against the hen harrier. * the Guardian *
No other book this year put the cat amongst the pigeons (or rather, the game birds) like Avery's impassioned investigation into driven grouse shooting and its impact on moorland ecology. * The Times *
This is a book you must read whether or not you support such shooting. * Highland News Group *
Pacy and passionate, this is nature writing that insists you sit up and take note. -- Stephanie Cross * The Lady *
Mr Avery writes with a light touch and endearing self-depreciation. He's passionate (obsessed?) about the hen harrier. * Country Life *

For fifteen years, Mark Avery was the Conservation Director of the RSPB. He is a well-known and highly respected blogger, public speaker and writer on UK nature conservation and environmental issues. A scientist by training, and a conservationist most of his life, Mark has written a hard-hitting, passionate but well-researched book about the conflict between driven grouse shooting and nature conservation and environmental sustainability. His previous book for Bloomsbury was A Message from Martha, the story of the extinction of the Passenger Pigeon.

GOR007681666
Inglorious: Conflict in the Uplands by Mark Avery
Mark Avery
Used - Very Good
Paperback
Bloomsbury Publishing PLC
2016-07-28
320
147291743X
9781472917430
N/A
Book picture is for illustrative purposes only, actual binding, cover or edition may vary.
This is a used book - there is no escaping the fact it has been read by someone else and it will show signs of wear and previous use. Overall we expect it to be in very good condition, but if you are not entirely satisfied please get in touch with us.