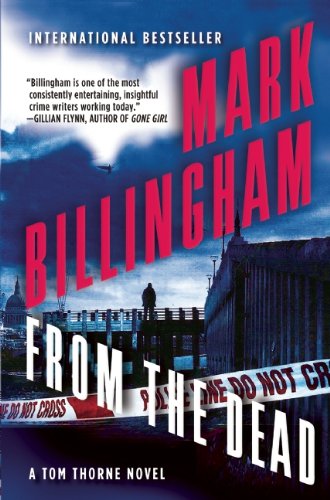 From the Dead
by Mark Billingham

From the Dead Summary

From the Dead: A Tom Thorne Novel by Mark Billingham

In the ninth Tom Thorne novel, a man long thought killed by his long-suffering wife, turns up alive. And other people begin to turn up dead.

A decade ago, Alan Langford's charred remains were discovered in his burnt-out car. His wife Donna was found guilty of conspiracy to murder her husband and sentenced to ten years in prison. But before she is released, Donna receives a nasty shock: an anonymous letter containing a photo of her husband. The man she hates with every fibre of her being--the man she paid to have murdered--seems very much alive and well. But how is it possible that her husband is still alive? Where is he? Who sent the photo, and why?

Customer Reviews - From the Dead

From the Dead Reviews

Praise for From the Dead

"Mark Billingham is a first-rate British crime writer who is too little known in this country. . . . The police procedural is a deceptively simple genre. You need a crime, a cop, suspects, complications and finally a solution. The art, of course, lies in the ingenuity of the crime, the depth of the characterizations and the quality of the writing. Billingham excels in all regards." --Patrick Anderson, Washington Post

"Billingham's ninth Tom Thorne thriller sees our hero working on a case in which a man long dead appears to be very much alive--to the chagrin of his wife, who had paid to ensure his expiration."--Entertainment Weekly

"Once again, [Billingham] has written a deep police procedural with significant insights into the characters. . . . Written with smoothness and urbanity, the plot moves forward in unexpected ways. Recommended."--Theodore Feit, The Midwest Book Review

"A nice mix of police procedure and chatty scenes, and some nice scenery."--Salem Macknee, Charlotte Observer

"With each of his books, Mark Billingham gets better and better. These are stories and characters you don't want to leave."--Michael Connelly

"Morse, Rebus, and now Thorne. The next superstar detective is already with us--don't miss him."--Lee Child

"Billingham is one of the most consistently entertaining, insightful crime writers working today."--Gillian Flynn

"Mark Billingham has brought a rare and welcome blend of humanity, dimension, and excitement to the genre."--George Pelecanos

"Billingham is a world-class crime writer and Tom Thorne is a wonderful creation. Rush to read these books."--Karin Slaughter

"Mark Billingham is one of my favorite new writers."--Harlan Coben

"Billingham leaps to the upper echelons of crime fiction in one bound."--John Harvey

Mark Billingham is one of England's best known and top-selling crime writers. His most recent book was a #1 bestseller in the UK. He has twice won the Theakston's Old Peculier Award for Best Crime Novel, and has also won a Sherlock Award for the Best Detective created by a British writer. His novels Sleepyhead and Scaredy Cat were made into a hit TV series starring David Morrissey as Thorne. Mark lives in North London with his wife and two children.

GOR007075274
From the Dead: A Tom Thorne Novel by Mark Billingham
Mark Billingham
Used - Very Good
Hardback
Grove Press / Atlantic Monthly Press
2014-02-20
390
0802122132
9780802122131
N/A
Book picture is for illustrative purposes only, actual binding, cover or edition may vary.
This is a used book - there is no escaping the fact it has been read by someone else and it will show signs of wear and previous use. Overall we expect it to be in very good condition, but if you are not entirely satisfied please get in touch with us.