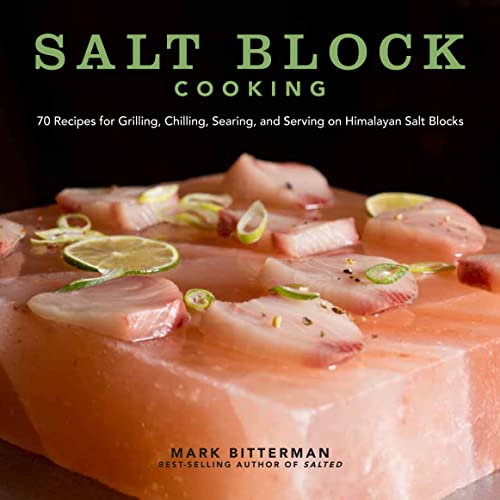 Salt blocks are a big deal, and they are getting bigger. They bring an otherworldly beauty to the kitchen. Luminous crystals shot through with hues of rose, garnet and ice offer a template for preparing food that is as arrestingly visual as it it tantalizingly beautiful. Salt expert, Mark Bitterman outlines the ancient practice of cooking on salt blocks, while providing simple, modern recipes. The introduction provides a thorough manual on everything you need to know to buy, use, heat, maintain, and clean salt blocks with confidence. 70 recipes are divided by 5 techniques: Serving, Curing, Warming, Cooking, and Chilling. Salt blocks are not only beautiful, but will appeal to people interested in grilling, baking, general cooking, curing, and notably, entertaining.

About 500,000 salt blocks come into the country every year. Author Mark Bitterman's company, The Meadow, sells over 70,000 blocks per year. Some are sold in bulk to hospitality businesses, but most are going directly to consumers. Here is the first book to comprehensively describe and photographically show how to use these blocks.

Q:--Barbara Goldberg "Is the idea of cooking and serving on salt blocks new?"

A:--Mark Bitterman "It's less than a decade old. Its discovery is a little shrouded in mystery. I think there was some opportunistic cooking maybe on salt stones in ages past. But in terms of salt-block cooking the way we think of it now, all evidence I have is that it's an American invention."

(This article can be found on Reuters and Yahoo News! 07/23/14) (Barbara Goldberg, Chicago Tribune)
"The salt expert gives lessons on cooking with salt bricks, which adds a sublte saltiness and can get hot enough on a grill to sear steak." (Food & Wine)
"If the subject of salt is intriguing to you, as it is to me, here are some books available on the subject: Mark Bittman. Salted: A Manifesto on the World's Most Essential Mineral. And also Salt Block Cooking: 70 Recipes for Grilling, Chilling, Searing and Serving on Himalayan Salt Blocks. Bittman is an expert on salt and tells the tale beautifully." (Lou Jane Temple, Kansas City Star)
"SALT BLOCK COOKING follows up on the author's prior 2010 introduction to the concept in SALTED and provides a powerful account on how to use Himalayan salt blocks for grilling, baking, and cooking. Some seventy recipes are used to display all the basics of using salt blocks to maximum advantage , and include everything you need to know about the process, from shopping for a block and maintaining one to healing, cooling and serving all kinds of foods. A 'must' for any cookbook collection looking for the basics on salt block use" (James A. Cox, Midwest Book Review)
"Good read. Salt Block Cooking by Mark Bitterman is the home cook's guide to a technique once only practiced by top chefs. Himalayan salt blocks are sold at specialty retail stores around the world, including The Spice & Tea Exchange, 309 N. Park Ave. in Winter Park.

This book is the first to address salt-block cooking and includes 70 recipes designed for this reusable cooking tool. The process involves heating the blocks and cooking meat or seafood directly on the surface. When not used for food preparation, the blocks make nifty serving platters for cold and room-temperature items.

Bitterman is an expert on culinary salt, chocolate and cocktail bitters. He won a James Beard Award for his first book, Salted." (Heather McPherson, Orlando Sentinel)

Mark Bitterman is the author of the James Beard Award-winning book, Salted. He is the leading expert in culinary salt, and has led the charge into the culinary adventure of cooking on salt blocks. As owner of the speciality store, The Meadow, with locations in Portland, OR and New York City, he is one of the largest importers, retailers, and wholesale distributors of salt blocks. He lectures at culinary schools such as the French Culinary Institute, the Institute of Culinary Education, and Le Cordon Bleu and has been recognized as a Local Food Hero by Cooking Light, and a Tastemaker by Food & Wine. He has been featured in the New York Times, The Atlantic, O magazine, GC, Rachael Ray, Wine Spectator, and on The Splendid Table, All Things Considered, CBS News, ABC News, Fox News, MSNBC, CNN and more.


Andrew Schloss, who frequently develops recipes for The Meadow's various communications and activities, contributes his expertise to the development of the recipes for the book. Schloss is the author of sixteen cookbooks including: Mastering the Grill (a New York Times best-seller) and The Science of Good Food (winner of an IACP Cookbook Award, a James Beard finalist, nominated by Le Cordon Bleu Food Media Awards as Best Food Book in the World), both co-authored with David Joachim. His latest books are Fire it Up (also with Joachim) and Homemade Sodas. He is the culinary force behind Cookulus, the first interactive cookbook app.

GOR006043797
Salt Block Cooking: 70 Recipes for Grilling, Chilling, Searing, and Serving on Himalayan Salt Blocks by Mark Bitterman
Mark Bitterman
Bitterman's
Used - Very Good
Hardback
Andrews McMeel Publishing
2013-06-06
224
1449430554
9781449430559
N/A
Book picture is for illustrative purposes only, actual binding, cover or edition may vary.
This is a used book - there is no escaping the fact it has been read by someone else and it will show signs of wear and previous use. Overall we expect it to be in very good condition, but if you are not entirely satisfied please get in touch with us.