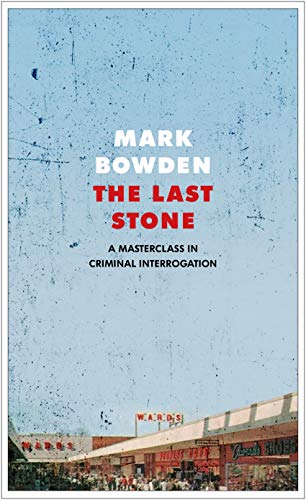 The Last Stone by Mark Bowden

From the bestselling author of Killing Pablo, a haunting and gripping account of the true-life search for the perpetrator of a hideous crime-the abduction and likely murder of two young girls in 1975-and the skilful work of the cold case team that finally brought their kidnapper to justice.

The Last Stone: A Masterpiece of Criminal Interrogation by Mark Bowden

From the bestselling author of Killing Pablo, a haunting and gripping account of the true-life search for the perpetrator of a hideous crime-the abduction and likely murder of two young girls in 1975-and the skilful work of the cold case team that finally brought their kidnapper to justice.

On March 29, 1975, sisters Kate and Sheila Lyon, aged ten and twelve, disappeared during a trip to a shopping mall in the suburbs of Washington, D.C. Three days later, eighteen-year-old Lloyd Welch visited the Montgomery County Police headquarters with a tip: he had seen the Lyon girls at the mall that day and had watched them climb into a strange man's car. Welch's tip led nowhere, and the police dismissed him as a drug-addled troublemaker wasting their time. As the weeks passed, and the police's massive search for the girls came up empty, grief, shock and horror spread out from the Lyon family to overtake the entire region. The trail went cold, the investigation was shelved and hope for justice waned.

Then, in 2013, a detective on the department's cold case squad reopened the Lyon files and eventually discovered that the officers had missed something big about Lloyd Welch in 1975.

In 1975, at age 23, Mark Bowden was a rookie reporter for a small Maryland newspaper reporting on the Lyons sisters' disappearance. In The Last Stone, Bowden returns to his first major story, taking us behind the scenes of the cold case team's exceptional interrogation of Lloyd Welch, the man who - nearly forty years after the crime - quickly became the most likely suspect in the Lyon case. Based on extensive interviews and video footage from inside the interrogation room, The Last Stone is a thrilling and revelatory reconstruction of a masterful investigation.

True-crime writers in America face a high bar, set by illustrious predecessors such as Truman Capote. The author of Black Hawk Down rises to the challenge in this reconstruction of how a horrific crime - the disappearance of two sisters from a mall in Maryland in 1975 - was partially solved 40 years later. Dogged and ingenious interrogation of a mendacious suspect finally gets at the truth. * The Economist Books of the Year *
A stirring, suspenseful, thoughtful story that, miraculously, neither oversimplifies the details nor gets lost in the thicket of a four-decade case file. This is a cat-and-mouse tale, told beautifully. But like all great true crime, The Last Stone finds its power not by leaning into cliche but by resisting it. * New York Times *
With its blistering descriptions of an American special-forces operation gone wrong, Mark Bowden's 1999 nonfiction book Black Hawk Down made for excellent action-movie fare. The story told in his latest work, the deeply unsettling The Last Stone, unfolds more slowly but is no less potent. Bowden displays his tenacity as a reporter in his meticulous documentation of the case. * Time *
In 1975, Bowden was a young reporter on the Baltimore News-American, covering the fruitless search for the Lyon sisters. Almost half a century later, he has filed his copy - and it's gripping. * The Spectator *
A riveting, serpentine story about the dogged pursuit of the truth, regardless of the outcome or the cost. * NPR *
Bowden delivers a narrative nonfiction masterpiece in this account of fiercely dedicated police detectives working to close a cold case... This is an intelligent page-turner likely to appeal even to readers who normally avoid true crime. * Publishers Weekly (starred review) *
Riveting...A keen synthesis of an intricate, decades-long investigation, a stomach-churning unsolved crime, and a solid grasp of time, place and character results in what is sure to be another bestseller for Bowden. * Kirkus Reviews *
an investigation worthy of Prime Suspect...a masterclass of interrogation * Strong Words *
Mark Bowden is the author of thirteen books, including Killing Pablo and the #1 New York Times bestseller Black Hawk Down. He reported at the Philadelphia Inquirer for twenty years and now writes for magazines including the Atlantic and Vanity Fair. He is also the writer in residence at the University of Delaware. His most recent book is Hue 1968: A Turning Point of the American War in Vietnam.
GOR010128150
9781611856316
1611856310
The Last Stone: A Masterpiece of Criminal Interrogation by Mark Bowden
Mark Bowden
Used - Very Good
Hardback
Grove Press / Atlantic Monthly Press
2019-07-04
352
N/A
Book picture is for illustrative purposes only, actual binding, cover or edition may vary.
This is a used book - there is no escaping the fact it has been read by someone else and it will show signs of wear and previous use. Overall we expect it to be in very good condition, but if you are not entirely satisfied please get in touch with us
Trustpilot