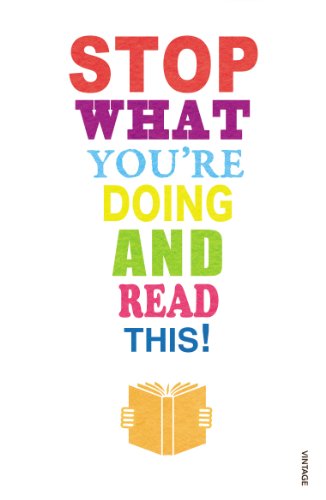 Stop What You're Doing And Read This!
by Mark Haddon

In Stock
$11.49
+10% GST
In the ten essays in this book some of our finest authors and passionate advocates from the worlds of science, publishing, technology and social enterprise tell us about the experience of reading, why access to books should never be taken forgranted, how reading transforms our brains, and how literature can save lives.
Very Good
6 in stock

Stop What You're Doing And Read This! Summary

Stop What You're Doing And Read This! by Mark Haddon

In any 24 hours there might be sleeping, eating, kids, parents, friends, lovers, work, school, travel, deadlines, emails, phone calls, Facebook, Twitter, the news, the TV, Playstation, music, movies, sport, responsibilities, passions, desires, dreams. Why should you stop what you're doing and read a book? People have always needed stories. We need literature - novels, poetry - because we need to make sense of our lives, test our depths, understand our joys and discover what humans are capable of. Great books can provide companionship when we are lonely or peacefulness in the midst of an overcrowded daily life. Reading provides a unique kind of pleasure and no-one should live without it. In the ten essays in this book some of our finest authors and passionate advocates from the worlds of science, publishing, technology and social enterprise tell us about the experience of reading, why access to books should never be taken forgranted, how reading transforms our brains, and how literature can save lives. In any 24 hours there are so many demands on your time and attention - make books one of them. Carmen Callil Tim Parks Nicholas Carr Michael Rosen Jane Davis Zadie Smith Mark Haddon Jeanette Winterson Blake Morrison Dr Maryanne Wolf & Dr Mirit Barzillai

Stop What You're Doing And Read This! Reviews

"A strong argument for making "reading more" one of your new Year's Resolutions" * Metro *
"Not having enough time to read is a common complaint. But as this collection of essays by ten committed bibliophiles attempts to show, reading should be an activity as regular as brushing your teeth" -- Emma Hagestadt * Independent *
"Ebullient... Subtle... Inspiring and impassioned... This advocacy for intense reading is punchy and sharp" -- James Urquhart * Financial Times *
"A delightful collection of essays from luminaries of the book world... Some are personal, some political, but all are passionate" * Good Housekeeping *

Mark Haddon is an author, illustrator and screenwriter who has written fifteen books for children and won two BAFTAs. His bestselling novel, The Curious Incident of the Dog in the Night-time was published simultaneously by Jonathan Cape and David Fickling in 2003. It won seventeen literary prizes, including the Whitbread Award. Mark Haddon lives in Oxford. Michael Rosen was born in 1946 in North London. One of the best-known figures in the children's book world, he is renowned for his work as a poet, performer, broadcaster and scriptwriter. As an author and by selecting other writers' works for anthologies he has been involved with over 140 books. He lectures and teaches in universities on children's literature, reading and writing. Michael is a familiar voice to BBC listeners and is currently presenting Word of Mouth, the magazine programme that looks at the English language and the way we use it. He visits schools with his one-man show to enthuse children with his passion for books and poetry. He was one of the first poets to make visits to schools throughout the UK and has also visited schools throughout the world In 2007 he was appointed Children's Laureate, a role which he held until 2009. While Laureate, he set up The Children's Funny Prize which give awards to the funniest children's books of the year. Zadie Smith was born in north-west London in 1975, and continues to live in the area. Her first novel, White Teeth, was the winner of The Whitbread First Novel Award, The Guardian First Book Award, The James Tait Black Memorial Prize for Fiction, and The Commonwealth Writers' First Book Award. Her second novel, The Autograph Man, won The Jewish Quarterly Wingate Literary Prize. Zadie Smith's third novel, On Beauty, was shortlisted for the Man Booker Prize, and won The Commonwealth Writers' Best Book Award (Eurasia Section) and the Orange Prize for Fiction. She has also edited an anthology of short stories entitled The Book of Other People. Her collection of essays Changing My Mind was published in November 2009. Carmen Callil was born and educated in Melbourne, Australia, and came to the UK in 1960. In 1972 she founded Virago and ten years later became Managing Director of Chatto & Windus. In 1994 she was awarded honorary doctorates by the universities of Sheffield, York, Oxford Brookes and The Open University. In 1996 she chaired the judging panel of the Booker Prize. She is the author (with Colm Toibin) of The Modern Library: The 200 Best Novels in English since 1950 and a judge for the Man Booker International Prize in 2011. She lives in London. Jeanette Winterson OBE is the author of ten novels, including The Passion, Sexing the Cherry and Written on the Body, a book of short stories, The World and Other Places, a collection of essays, Art Objects as well as many other works, including children's books, screenplays and journalism. Her writing has won the Whitbread Award for Best First Novel, the John Llewellyn Rhys Memorial Prize, the E. M. Forster Award and the Prix d'argent at Cannes Film Festival. Her latest book, Why Be Happy When You Could Be Normal, will be published by Jonathan Cape in 2011. Born in Manchester in 1954, Tim Parks moved permanently to Italy in 1980. Author of novels, non-fiction and essays, he has won the Somerset Maugham, Betty Trask and Llewellyn Rhys awards, and been shortlisted for the Man Booker Prize. His works include Destiny, Europa, Dreams of Rivers and Seas, Italian Neighbours, An Italian Education, A Season with Verona and Teach Us to Sit Still. Born in Skipton, Yorkshire, Blake Morrison is the author of two bestselling memoirs, And When Did You Last See Your Father? and Things My Mother Never Told Me, two novels (most recently the acclaimed South of the River and The Last Weekend), and a study of the Bulger case, As If. He is also a poet, critic, journalist and librettist. He teaches Creative Writing at Goldsmiths College, and lives in south London. Dr. Maryanne Wolf is the Director of the Center for Reading and Language Research at Tufts University in the US, where she is an Associate Professor of Child Development. She is the author of Proust and the Squid and has published hundreds of articles on reading and learning disabilities. Nicholas Carr writes about technology, culture, and economics. His most recent book, The Shallows: What the Internet Is Doing to Our Brains, is a 2011 Pulitzer Prize nominee and a New York Times bestseller. Nick is also the author of two other influential books, The Big Switch: Rewiring the World, from Edison to Google (2008) and Does IT Matter? (2004). His books have been translated into more than 20 languages. Jane Davis is the Director and founder of The Reader Organisation (TRO), a national charity dedicated to bringing about a reading revolution by making it possible for people of all ages, backgrounds and abilities to enjoy and engage with literature on a deep and personal level. Their 'Get Into Reading' read-aloud groups reach people who may not otherwise read, including people living in deprived areas, the mentally or chronically ill, older people living in Care Homes, prisoners, recovering addicts and excluded children. The organisation started on Merseyside but has since expanded across the UK and beyond.

GOR003600773
Stop What You're Doing And Read This! by Mark Haddon
Mark Haddon
Used - Very Good
Paperback
Vintage Publishing
2011-12-26
192
0099565943
9780099565949
N/A
Book picture is for illustrative purposes only, actual binding, cover or edition may vary.
This is a used book - there is no escaping the fact it has been read by someone else and it will show signs of wear and previous use. Overall we expect it to be in very good condition, but if you are not entirely satisfied please get in touch with us.