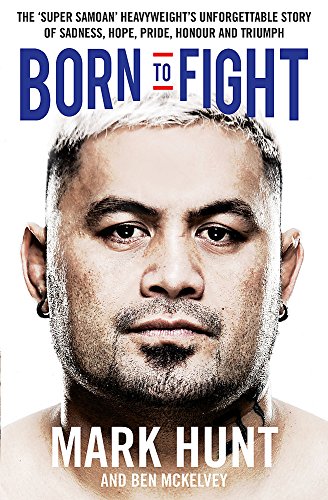 Born to Fight
by Mark Hunt

In Stock
$42.99
inc. GST
A powerful story of sadness, hope, pride, honour and triumph from the real-life Rocky!
Good Well Read
Only 1 left

Raw, confronting and honest, UFC champion Mark Hunt's inspiring autobiography shows it is possible to defy the odds and carve a better life. Born into a Mormon Samoan family, Hunt details his harrowing early life, his troubled teen years, and his angry youth with no apparent future.

After being plucked from an Auckland street fight and dropped into his first kickboxing bout, Mark went on to achieve unprecedented success in Australian and New Zealand combat sports. In an ongoing career that has spanned the globe, Mark Hunt has been in some of the UFC, Pride and K-1's most memorable battles. But in some ways those fights pale in comparison to that which he has overcome out of the ring and cage.

As fearless with his opinions as he is in the Octagon, Mark pulls no punches in revealing the highs and lows of his extraordinary life.

Ben Mckelvey (Author)
Ben Mckelvey is a freelance writer and editor from Sydney who has filed for GOOD WEEKEND, GQ, VOYEUR, ROLLING STONE, THE BULLETIN, COSMO, CLEO and the SMH, AGE and WEST AUSTRALIAN newspapers. Ben's previous gigs have included editing SPORT&STYLE and JUICE magazines, and working on the SYDNEY MORNING HERALD as a Senior Feature Writer. He has been embedded with the ADF in East Timor and Iraq, and has worked independently in Iran and Afghanistan.

GOR008076143
Born to Fight: The bestselling story of UFC champion Mark Hunt, the real life Rocky by Mark Hunt
Mark Hunt
Used - Good
Paperback
Hachette Australia
2015-09-29
352
0733634621
9780733634628
N/A
Book picture is for illustrative purposes only, actual binding, cover or edition may vary.
The book has been read but remains in clean condition. All pages are intact and the cover is intact. Some minor wear to the spine.