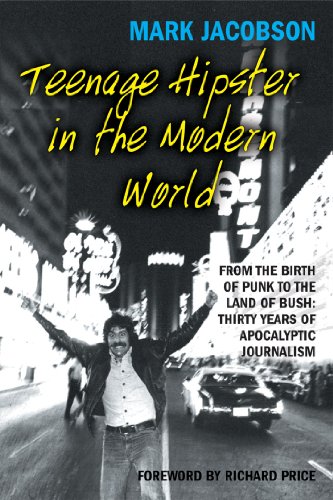 Teenage Hipster in the Modern World by Mark Jacobson

The author of 12,000 Miles in the Nick of Time and Gojiro collects the best writings from his years as journalist on the beat in this poignant snapshot of New York City and a generation, with pieces on politics, sports, celebrity, the arts, and more. Original.

Teenage Hipster in the Modern World: From the Birth of Punk to the Land of Bush: Thirty Years of Apocalyptic Journalism by Mark Jacobson

In the pages of The Village Voice, Rolling Stone, Esquire, New York, Maxim, and GQ, Mark Jacobson has carried on in the tradition of such titans as Joe Mitchell, A. J. Liebling, Jimmy Breslin, and Pete Hamill as one of New York City's finest journalistic provocateurs. Now he collects the best of his years in Teenage Hipster in the Modern World.
Jacobson has been witness to a decidedly different sort of history. His "beats" range far and wide, delving into the realms of politics, sports, and celebrity in pieces on such luminaries as Bob Dylan, Julius Erving, Chuck Berry, Pam Grier (in her Scream, Blacula, Scream days), Martin Scorsese, and many others. But for Jacobson, New York City has always been Topic Number One. Jacobson tells the story of the city in his classic essays on the beginnings of punk rock back in the times of "pregentrification" to the heart-wrenching days of 9/11.
With a foreword from best-selling author Richard Price, Teenage Hipster in the Modern World is a hilarious and poignant snapshot of a city, a generation, and a man who wonders how he went from hanging out at CBGB to being an AARP card-holding father of three.
GOR010604034
9780802170088
0802170080
Teenage Hipster in the Modern World: From the Birth of Punk to the Land of Bush: Thirty Years of Apocalyptic Journalism by Mark Jacobson
Mark Jacobson
Used - Very Good
Paperback
Grove Press / Atlantic Monthly Press
2005-03-23
480
N/A
Book picture is for illustrative purposes only, actual binding, cover or edition may vary.
This is a used book - there is no escaping the fact it has been read by someone else and it will show signs of wear and previous use. Overall we expect it to be in very good condition, but if you are not entirely satisfied please get in touch with us
Trustpilot