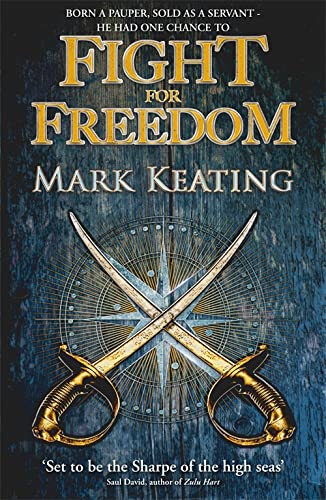 Fight for Freedom
by Mark Keating

In Stock
$13.69
inc. GST
The first in the acclaimed Patrick Devlin series of swashbuckling historical novels.
Very Good
Only 4 left

Fight for Freedom by Mark Keating

Sold by his father for four guineas, Patrick Devlin knows just how cheap life is in a world of slavery, violence and greed.

Devlin is taken as a servant by Captain John Coxon of the Royal Navy, whose job in this uneasy peace time is to protect the stupendous wealth of the East India Trading Company.

But when pirates sink Coxon's ship, Devlin willingly trades his servile existence for their life of dangerous liberty.

And when he sets off in pursuit of a secret cargo of French bullion, it is Coxon - disgraced and hungry for revenge - who is despatched to bring his former dog to heel.

Fight for Freedom was published in hardback under the title The Pirate Devlin.

Top quality historical fiction. Mark Keating knows his period inside-out and his stylish prose and devilish plot fold it into a gripping read. This is the start of something big. * Harry Sidebottom, author of Warrior of Rome *
A superbly imagined, vividly written debut. Devlin is set to become the Sharpe of the high seas. * Saul David, author of Zulu Hart *

Mark Keating was born in North London and spent most of his life working around the South East selling everything from comic books to champagne.

He now lives in Pembrokeshire with his wife and sons and is currently looking at the sea.

GOR002206736
Fight for Freedom by Mark Keating
Mark Keating
Used - Very Good
Paperback
Hodder & Stoughton
2010-09-30
384
0340992689
9780340992685
N/A
Book picture is for illustrative purposes only, actual binding, cover or edition may vary.
This is a used book - there is no escaping the fact it has been read by someone else and it will show signs of wear and previous use. Overall we expect it to be in very good condition, but if you are not entirely satisfied please get in touch with us.