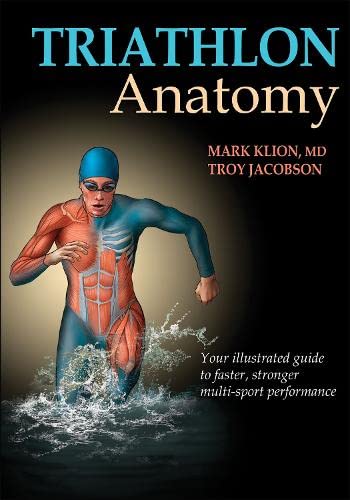 The e-book format allows readers to bookmark, highlight, and take notes throughout the text. When purchased through the HK site, access to the e-book is immediately granted when your order is received.

See what it takes to maximize multisport strength, power, speed, and endurance. Triathlon Anatomy will show you how to improve your performance by increasing muscular strength and optimizing the efficiency of every movement.

Triathlon Anatomy features 82 of the most effective multisport exercises with step-by-step descriptions and full-color anatomical illustrations highlighting the muscles in action. But you'll see much more than the exercises-you'll also see their results.

Triathlon Anatomy places you at the starting line and into the throes of competition by fundamentally linking each exercise to multisport performance. You'll see how to strengthen muscles and increase stamina for running across various terrains, cycling steep inclines, and swimming in open water.

You'll learn how to modify exercises to target specific areas, reduce muscle tension, and minimize common injuries. Best of all, you'll learn how to put it all together to develop a training program based on your individual needs and goals.

Whether you're training for your first triathlon or preparing for your sixth Ironman, Triathlon Anatomy will ensure you're ready to deliver your personal best.

"In Triathlon Anatomy, Mark Klion and Troy Jacobson help triathletes get the most out of their strength training workouts while avoiding injury. The book is an essential resource for anyone striving for multisport success."

"Troy Jacobson has been at the forefront of coaching athletes of all levels for more than 20 years. Triathlon Anatomy reflects his coaching philosophy, which has generated as much success for his clients as any coach in our sport."

Mark Klion, MD, is a board-certified orthopedic surgeon and sports medicine specialist. After receiving a bachelor's degree from St. Lawrence University in upstate New York, he earned his medical degree from the Mount Sinai School of Medicine in New York City. He completed his residency in orthopedic surgery at Mount Sinai Hospital. He then completed a sports medicine fellowship at the University of Chicago. During his fellowship he specialized in arthroscopic surgery and reconstructive knee and shoulder surgery. He is a clinical instructor at the Mount Sinai School of Medicine and a member of their shoulder and sports medicine service. He serves as an educator for the medical school and the department of orthopedic surgery. He is also the director of orthopedics at St. Barnabas Hospital in New York. He performs the newest techniques for cartilage repair, regeneration, and meniscal transplantation. Dr. Klion has extensive experience with arthroscopic rotator cuff repairs and shoulder stabilization procedures.

Dr. Klion is also an avid triathlete and marathon runner. He has completed 10 Ironman triathlons, including Hawaii Ironmans in 2000 and 2001. He has completed 15 marathons and several ultradistance races. He serves as the medical codirector for the New York City Triathlon and Toughman Half Ironman and is the orthopedic consultant for the Triathlon Academy and Foundation bicycle team.

Troy Jacobson has been a leader in the field of triathlon coaching since 1992. He is the owner of Lifesports, Inc., an endurance multisport coaching company, and is recognized as a pioneer in developing and marketing online coaching services. He is the innovator and driving force behind the popular endurance sport training DVDs Spinervals, Runervals, and Swimervals. He created Train Right software, an intuitive coaching program chosen as the official software of Tri-Fed USA.

In 1996 Tri-Fed became USA Triathlon, and Jacobson became a member of the inaugural USA Triathlon coaching committee. When triathlon made its debut at the 2000 Olympic Games in Sydney, he was coach of the first U.S. finisher, Joanna Zeiger. He is an official Ironman coach and also serves as head multisport coach at Life Time Fitness, a publicly traded national health club chain.

Jacobson has been a competitive triathlete since 1988 and continues to compete at the elite masters level. In the 1990s he became a professional triathlete, winning several USA Triathlon Long Course National Championships and placing as high as 20th overall at the Ironman Triathlon World Championships.

Chapter 1 The Triathlete in Motion

Chapter 8 Back and Neck

GOR007608840
Triathlon Anatomy by Mark Klion
Mark Klion
Anatomy
Used - Very Good
Paperback
Human Kinetics Publishers
2012-12-04
208
1450421385
9781450421386
N/A
Book picture is for illustrative purposes only, actual binding, cover or edition may vary.
This is a used book - there is no escaping the fact it has been read by someone else and it will show signs of wear and previous use. Overall we expect it to be in very good condition, but if you are not entirely satisfied please get in touch with us.