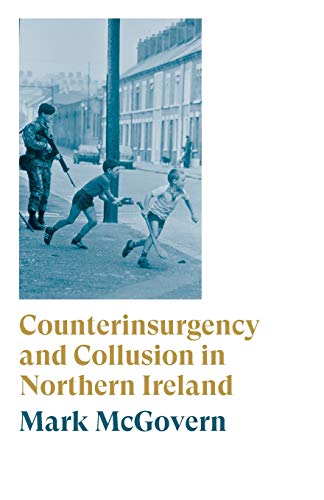 Counterinsurgency and Collusion in Northern Ireland
by Mark McGovern

Out of Stock
$41.99
inc. GST
An analysis of UK state collusion with loyalist paramilitaries as an aspect of British military counterinsurgency during the Troubles.
Very Good
Only 0 left

Counterinsurgency and Collusion in Northern Ireland by Mark McGovern

Collusion by British state forces in killings perpetrated by loyalist paramilitaries was a dubious hallmark of the 'dirty war' in the north of Ireland. Now, more than twenty years since the Good Friday Agreement, the story of collusion remains one of the most enduring and contentious legacies of the conflict, a shadow that trails British counterinsurgency to this day.

Here Mark McGovern turns back the clock to the late 1980s and early '90s - the 'endgame' of the Troubles, and a period defined by a rash of state-sanctioned paramilitary killings. Drawing on previously unpublished evidence, and original testimony from victims' families and eyewitnesses, he examines several dozen killings of republicans that took place in the Mid-Ulster area, and the impact on their families and communities.

Placing these accounts within a wider critical analysis of the nature of British counterinsurgency and the state use of agents and informers, McGovern paints a damning picture of covert, deniable and unlawful violence.

'If this is a harrowing book to read, one can only imagine how difficult it was to write. On each page, our respect for the author, and the families battling on against all the odds, intensifies' -- Liz Fekete, Director, Institute of Race Relations
'Essential reading for those interested in counter-terrorism, counterinsurgency and the management of internal conflict around the globe ... challenging, controversial and meticulous' -- Fionnuala Ni Aolain, Regent Professor, University of Minnesota Law School and Professor of Law, The Queens University Law School
'McGovern narrates a nerve-jangling roll-call of evidence of collusion and extra-judicial killings that demands a reckoning, not just with those who hunted democracy down across the countryside and streets of Northern Ireland, but more importantly with the well-mannered officials who skulked in the shadows, contriving atrocity' -- Eamonn McCann, author of 'War and an Irish Town'
'An outstanding book by a fine scholar. Engaged research at its best' -- John Newsinger, author of 'British Counterinsurgency'

Mark McGovern is Professor in Sociology at Edge Hill University, UK. In his research he has worked closely with NGOs, victms' groups and lawyers over many years on issues of conflict transformation and state violence, particularly in Northern Ireland. His publications include Ardoyne: The Untold Truth and articles for Race and Class, Sociology, State Crime and Critical Studies on Terrorism.

GOR009736036
Counterinsurgency and Collusion in Northern Ireland by Mark McGovern
Mark McGovern
Used - Very Good
Paperback
Pluto Press
2019-03-20
256
0745338992
9780745338996
N/A
Book picture is for illustrative purposes only, actual binding, cover or edition may vary.
This is a used book - there is no escaping the fact it has been read by someone else and it will show signs of wear and previous use. Overall we expect it to be in very good condition, but if you are not entirely satisfied please get in touch with us.