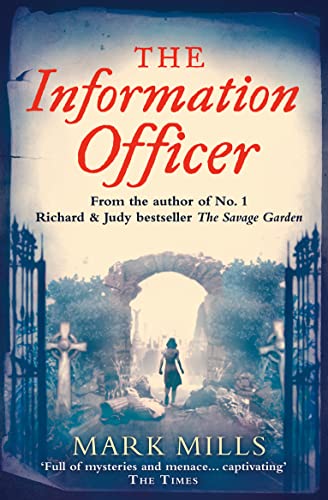 The Information Officer
by Mark Mills

The Information Officer by Mark Mills

"You want to know who I am? I'm the last living soul you'll ever set eyes on"

Summer, 1942. For the people of Malta, suffering daily bombing raids, the British are the last line of defence against the Nazis. And it is Max Chadwick's job as the information officer to ensure the news the islanders receive maintains morale.

So when Max is given proof suggesting a British officer is murdering local women, he knows the consequences of discovery are dire. With the violence on the war-ravaged island escalating daily, he embarks on a private investigation, hidden from the eyes of superiors, friends and the woman he loves.

But Max finds himself torn between patriotic duty and personal honour in his efforts to track down the killer... an elusive figure always one step ahead of his hunter.

Acclaim for `The Information Officer':

'Mark Mills is a superb writer, and The Information Officer is a superb read' Joseph O'Neill

'A forgotten corner of World War II rediscovered and expertly revealed to us. Fascinating and shrewdly compelling - Mark Mills does it again' William Boyd

`A good thriller, a stunning book about human beings surviving under extreme circumstances, an eye-opener for anyone who didn't know the `Malta story' and a master-class in fluent storytelling' Eurocrime

Acclaim for 'The Savage Garden':

'An intriguing puzzle, elegantly written... a pleasure to read... the atmosphere of an Italian summer and of the mysterious garden are beautifully captured' Sunday Telegraph

'Mills writes beautifully; leading us gently and atmospherically through the Tuscan renaissance garden... an unusual, captivating novel that is a cut above the norm' The Times

'A fine sense of period and place, a well-managed narrative, crisp prose and fascinating information... Mills is one to watch' Spectator

'Mills juggles the mysteries of three periods, switching between centuries with a conjuror's skill... the book is beautifully written, giving life to the figures in their Tuscan landscape' Literary Review

Mark Mills graduated from Cambridge University in 1986. He has lived in both Italy and France, and has written for the screen. His first novel, `The Whaleboat House', won the 2004 Crime Writer's Association for Best Novel by a debut author. His second, `The Savage Garden', was a Richard and Judy Summer Read and No 1 bestseller. He lives in Oxford with his wife and two children.

GOR000984635
The Information Officer by Mark Mills
Mark Mills
Used - Very Good
Paperback
HarperCollins Publishers
2009-04-30
416
0007276885
9780007276882
N/A
Book picture is for illustrative purposes only, actual binding, cover or edition may vary.
This is a used book - there is no escaping the fact it has been read by someone else and it will show signs of wear and previous use. Overall we expect it to be in very good condition, but if you are not entirely satisfied please get in touch with us.