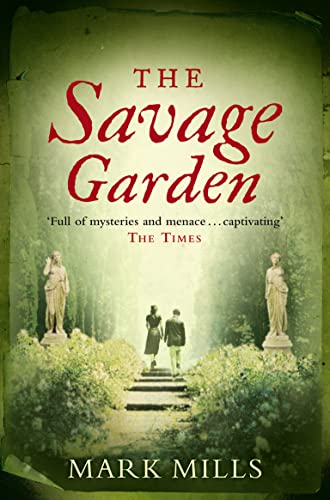 The Savage Garden
by Mark Mills

The No.1 bestselling novel and Richard & Judy Summer Read: a haunting tale of murder, love and lost innocence for fans of Carlos Ruiz Zafon and Jed Rubenfeld

The Savage Garden by Mark Mills

The No.1 bestselling novel and Richard & Judy Summer Read: a haunting tale of murder, love and lost innocence for fans of Carlos Ruiz Zafon and Jed Rubenfeld

Behind a villa in the heart of Tuscany lies a Renaissance garden of enchanting beauty. Its grottoes, pagan statues and classical inscriptions seem to have a secret life of their own - and a secret message, too, for those with eyes to read it.

Young scholar Adam Strickland is just such a person. Arriving in 1958, he finds the Docci family, their house and the unique garden as seductive as each other. But post-War Italy is still a strange, even dangerous place, and the Doccis have some dark skeletons hidden away which Adam finds himself compelled to investigate.

Before this mysterious and beautiful summer ends, Adam will uncover two stories of love, revenge and murder, separated by 400 years... but is another tragedy about to be added to the villa's cursed past?

Acclaim for `The Savage Garden':

`An intriguing puzzle, elegantly written... a pleasure to read... the atmosphere of an Italian summer and of the mysterious garden are beautifully captured' Sunday Telegraph

`Mills writes beautifully; leading us gently and atmospherically through the Tuscan renaissance garden... an unusual, captivating novel that is a cut above the norm' The Times

`Mills has done his research... there are potent mysteries, a beautiful heroine and a charismatic old lady who knows a lot more than she's saying, which is enough to keep the reader, like Adam, rearranging the puzzle pieces until they all slot into place' London Lite

`A fine sense of period and place, a well-managed narrative, crisp prose and fascinating information... Mills is one to watch' Spectator

`Mills juggles the mysteries of three periods, switching between centuries with a conjuror's skill... the book is beautifully written, giving life to the figures in their Tuscan landscape' Literary Review

`A mesmerizing piece of writing... Mills is a skillful writer and combines all the disparate strands into a striking tapestry' Independent

'To be savoured... Mills weaves together an intriguing mixture of love, loss and divided loyalties' Guardian

Mark Mills graduated from Cambridge University in 1986. He has lived in both Italy and France, and has written for the screen. His first novel, `The Whaleboat House', won the 2004 Crime Writer's Association for Best Novel by a debut author.
His second novel, `The Savage Garden' has received stunning reviews in hardback and is a Richard & Judy 2007 Summer Read. He lives in Oxford with his wife and two children.

GOR000469838
The Savage Garden by Mark Mills
Mark Mills
Used - Very Good
Paperback
HarperCollins Publishers
2007-07-02
400
000716193X
9780007161935
Short-listed for CWA Ellis Peters Historical Award 2007
Book picture is for illustrative purposes only, actual binding, cover or edition may vary.
This is a used book - there is no escaping the fact it has been read by someone else and it will show signs of wear and previous use. Overall we expect it to be in very good condition, but if you are not entirely satisfied please get in touch with us.