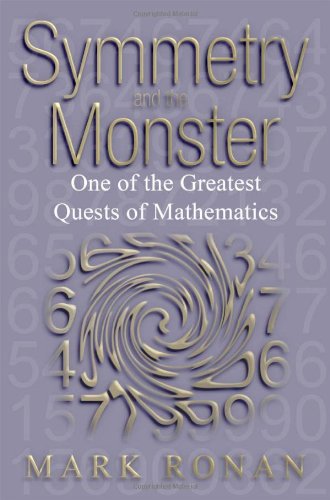 Symmetry and the Monster
by Mark Ronan

In Stock
$14.99
+10% GST
The hunt for the 'Monster' of symmetry is one of the great mathematical quests. The Monster is a giant snowflake in 196,884 dimensions, with a beautiful structure which may turn out to unlock our understanding of symmetry and the very fabric of our universe. The story of its discovery became the biggest joint mathematical project of all time.
Very Good
Only 2 left

Symmetry and the Monster Summary

Symmetry and the Monster: One of the Greatest Quests of Mathematics by Mark Ronan

Mathematics is being driven forward by the quest to solve a small number of major problems - generating excitement in the mathematical world and beyond. Four famous challenges have been Fermat's Last Theorem, the Riemann Hypothesis, Poincare's Conjecture, and, now, the quest for the 'Monster' of Symmetry. It is this latter that forms the topic of this book. Although its roots go back much further, the quest to understand symmetry really begins with the tragic young genius Evariste Galois, who died at the age of 20 in a duel. He used symmetry to understand algebraic equations, and he discovered that there were building blocks or 'atoms of symmetry'. Most fit into a table, rather like the periodic table of elements, but there are 26 exceptions. The biggest of these was dubbed 'the Monster' - a giant snowflake in 196,884 dimensions. At first the Monster was only dimly seen. Did it really exist, or was it a mirage? Many mathematicians became involved. The Monster became clearer, and it was no longer monstrous but a beautiful form that pointed out deep connections between symmetry, string theory, and the very fabric and form of the universe.The story of the discovery involves some extraordinary characters, and Mark Ronan brings these people to life, and recreates in accessible language the growing excitement of what became the biggest joint project ever in the field of mathematics - the hunt for the Monster.

Symmetry and the Monster Reviews

...includes entertaining glimpses of the personalities involved ...but best of all gives an admirable amount of detail... TLS a fascinating book that will appeal to anyone with an appetite for exploration and discovery, and which is accessble to all.

Mark Ronan is a Professor at the University of Illinois at Chicago, and a Visiting Professor of Mathematics at University College London.

GOR001935919
Symmetry and the Monster: One of the Greatest Quests of Mathematics by Mark Ronan
Mark Ronan
Used - Very Good
Hardback
Oxford University Press
2006-05-18
224
0192807226
9780192807229
N/A
Book picture is for illustrative purposes only, actual binding, cover or edition may vary.
This is a used book - there is no escaping the fact it has been read by someone else and it will show signs of wear and previous use. Overall we expect it to be in very good condition, but if you are not entirely satisfied please get in touch with us.